The Cupertino, Calif. company announced its first quarter earnings on Jan. 27, and to nobody’s surprise sales during the period were dominated by Apple’s iPhone. The company sold a record-breaking 51 million handsets during the quarter (an increase of 3.2 million units compared with the 2012 quarter), and this helped Apple secure total revenue of $56.7 billion with $13.1 billion profit.

Sales of Apple’s iPad, at 26 million, also saw a year-over-year increase of 3.1 million units, and Mac sales jumped up to 4.8 million compared with sales of 4.1 million during the same 2012 quarter.

We are really happy with our record iPhone and iPad sales, the strong performance of our Mac products and the continued growth of iTunes, Software and Services. We love having the most satisfied, loyal and engaged customers, and are continuing to invest heavily in our future to make their experiences with our products and services even better.

For Q2 2014, Apple’s guidance revenue is set at between $42 billion and $44 billion. No major products were announced, but the company did launch a less expensive 8GB iPhone 5c in select international markets, it relaunched the fourth-generation 9.7-inch iPad, and it further improved its mobile OS with iOS 7.1.

Check back with us on April 23 for a breakdown of Apple’s second quarter results.

In the meantime, see: AppAdvice Daily: Microsoft Word On Your iPad And Movie Discovery Made Easy, AppAdvice App Of The Week For March 31, 2014, and The Pebble Smart Watch Is Now Available At Target. 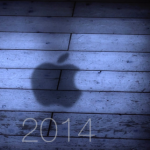 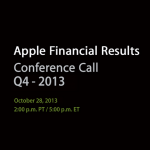 Apple To Conduct Q4 2013 Earnings Conference Call On Oct. 28
Nothing found :(
Try something else