There have been a couple of simple yet useful jailbreak tweaks appearing on the Cydia Store over the last few days, and one of the most recent is BlurFolders: a package that allows users to set a full-screen mode for iOS app folders.

You can pick up the new jailbreak tweak free of charge, and it’s configured to play nice with iOS 7. Once installed, users will find that a new preferences pane has been added to the built-in Settings application, and here users can adjust how BlurFolders runs.

Given that this is a fairly simple jailbreak tweak, options are minimal. First, there’s a kill switch for the package, and second, a toggle button allows users to hide the title of iOS app folders.

Once full-screen mode is enabled, the effect is quite nice. It fits in well with the design changes made in iOS 7, and I personally hope this is something Apple will implement within a future version of its mobile OS. Folders seamlessly open in full-screen mode, and the animation is smooth and quick (though you could of course give it a speed boost using Speed Intensifier, which we discussed earlier today).

If you’re looking to activate a full-screen mode for iOS app folders, consider downloading BlurFolders. As mentioned, it’s available free of charge on the Cydia Store, and so jailbreakers have no excuse not to take it for a spin.

Folks looking to further enhance iOS app folders should check out BetterFolders, FolderEnhancer, or InfiniFolders, all of which work well.

See also: Apple To Announce WWDC April 23?, Cydia Tweak: How To Give Animations A Speed Boost Under iOS 7, and The Microsoft Office Mobile App For iPhone Is Now Free For Home Users. 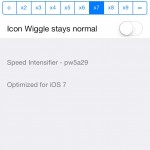 Cydia Tweak: How To Give Animations A Speed Boost Under iOS 7 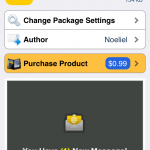 Cydia Tweak: QuickPass Adds A Useful Passcode Toggle To The Settings App
Nothing found :(
Try something else