You are using an outdated browser. Please upgrade your browser to improve your experience.
by Joe White
January 25, 2014

There are a couple of folder-enhancing jailbreak tweaks in the Cydia Store already, but now one of the originals is finally optimized for iOS 7. We are of course talking about FolderEnhancer, which has long provided users with a means of giving their iOS app folders a boost on a jailbroken iPhone, iPad, or iPod touch.

FolderEnhancer first came to our attention in 2010, and back then, the state of iOS app folders was a lot different. Now, and especially in iOS 7, Apple has incorporated a number of FolderEnhancer's most-loved features in its mobile OS, such as folder pages and support for housing a larger number of iOS apps in folders. But does that mean jailbreak tweaks like FolderEnhancer are now redundant? Think again.

Apple hasn't quite caught up with the jailbreak scene in this respect, and FolderEnhancer can bring a handful of really useful folder-based features to our iDevices. First, the jailbreak tweak allows users to place folders within folders much easier than Apple's iOS 7 accidentally allowed. You just pick up a folder while in “wiggly mode,” and drop it on another to create a nested folder; this makes it much easier to maintain a clean and tidy Home screen (which is something we definitely appreciate).

FolderEnhancer also allows users to customize how iOS app folders behave. You can switch animations on and off, or alter whether folders close when an iOS application has been launched. FolderEnhancer allows for larger folders, too, which is something iPad users will definitely appreciate. You can configure folder rows of four by four and five by five, and additional layout options are said to be in the pipeline, according to the jailbreak tweak's release notes.

The only downside to FolderEnhancer is its price. Though we've got no problem at all with paying for quality jailbreak tweaks, iDevice users can enjoy a similar folder-enhancing experience using the free BetterFolders, which we told you about a couple of days ago. FolderEnhancer definitely expands on BetterFolders in several ways, but if you're only looking to create nested folders or increase folder sizes, then the free jailbreak tweak could be a smarter choice. 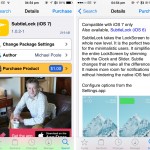 Cydia Tweak: SubtleLock Can Give Your iOS 7 Lock Screen A More Elegant Look 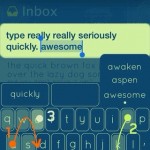 Hipjot Creator Planning System-Wide Swype-Style Keyboard For iOS
Nothing found :(
Try something else