You are using an outdated browser. Please upgrade your browser to improve your experience.
by Joe White
March 24, 2014
Dated, a new jailbreak tweak, allows iOS device users to customize how timestamps are displayed alongside SMS messages and iMessages inside the built-in Messages app. You can download the package for $0.99 on the Cydia Store, and it’s optimized for iOS 7 and ARM64-devices. Once installed, Dated adds a new preferences pane to the Settings application, and here users can choose a formula for the Messages app’s timestamps. Users can activate toggle buttons to set whether the year, month, day, hour, minute, second, and an AM or PM indicator are displayed or hidden in timestamps. Dated also displays a live preview of timestamps in its preferences pane as users switch the jailbreak tweak’s various options on and off. At the minute this is as far as the package’s feature set extends, but the developer is welcoming feedback from users and has suggested that additional options – including font size, color, and formatting – could be added if enough users make a request. As usual, feedback can be submitted to jailbreak developers from inside the Cydia app. As a reminder, Apple added timestamps to the built-in Messages app with iOS 7, and users can reveal them by swiping from right to left in the application. Dated might be a simple jailbreak tweak, but it’s nevertheless one that certain iOS device users will appreciate. As mentioned, it’s available to download now for $0.99 on the Cydia Store, and it’s optimized for iOS 7 and ARM64-devices. For those of you interested in gaining an enhanced messaging experience on iOS, consider taking biteSMS for a spin. This popular jailbreak app is a fully featured replacement for the Messages application, and it offers users quick compose and quick reply widgets, scheduled messages, auto-forwarding, and much more. You can pick up biteSMS free of charge on the Cydia Store, and it received an update for iOS 7 back in February. See also: Blast Your Way Through The Cosmos In Order To Survive In Star Horizon, Cydia Tweak: Bring Barrel To The iOS Dock With DockFlow, and Apple Says 85 Percent Of Devices Are Running iOS 7. 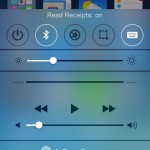 Cydia Tweak: How To Quickly Toggle Read Receipts Under iOS 7 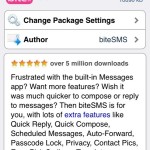 Cydia Tweak: biteSMS Gets Its Long Awaited Update For iOS 7
Nothing found :(
Try something else