Images of Apple’s in-construction sapphire production plant in Mesa, Ariz. have recently surfaced online, along with a new rumor claiming the Cupertino, Calif. company could be looking to further expand its new plant into “a neighboring building.”

As a reminder, Apple signed a deal with the Arizona-based GT Advanced Technologies to manufacture its own “unscratchable” sapphire glass for use in future products. News concerning the deal first appeared in November, and at the time we heard Apple had invested half a billion dollars in the sapphire-production plant.

GT Advanced Technologies then went on a “hiring spree,” amassing additional staff for its state-of-the-art sapphire-production system in January.

Now, AppleInsider has shared a handful of images taken of the in-construction plant. Building work is nearing completion, according to the publication, with sources claiming staff are working “around the clock and even on weekends to get the job done by June.”

Rumors floating around the local electrical industry in Arizona claim Apple may be mulling a project expansion into a building on the site that was previously owned by photovoltaic panel maker First Solar. The purpose of the support structure is unknown.

What we’re more certain of, however, is that Apple is producing sapphire glass for a next-generation product – and most likely, its iPhone 6.

More than a handful of reports have claimed that the upcoming smartphone will feature a sapphire glass display, with the Cupertino, Calif. company ditching Corning’s Gorilla Glass for the ultra-durable material. Apple already uses sapphire glass on its Touch ID-equipped Home buttons and camera modules, and now the iPhone’s display is the next section of the smartphone set to benefit from the material.

Besides adding a sapphire glass-equipped screen, Apple’s iPhone 6 is also expected to be bigger and thinner than its predecessors. The new handset should be announced later this year at a dedicated iPhone event. 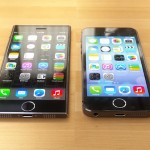 The Latest iPhone 6 Concept Is Big, Beautiful, But Square?