Apple co-founder Steve Wozniak is no recluse, and he continues to make countless public appearances offering his unique insight into Cupertino’s performance and the consumer electronics industry at large. A few years ago, however, he also helped two parents surprise their daughter with a brand new iMac, and a video of the exchange has surfaced online recently.

A few years ago, Steve and Janet Wozniak came to town to help us have a little fun with our kid Emma. Emma’s dad met them around the back of the block to give them Emma’s new iMac, and then they drove back around and rang the doorbell to deliver it … and shocked the heck out of Emma and her sister and friends. Little sister Elizabeth got the iPod Touch as a “one more thing,” and Janet shot the video.

Steve’s known to be quite the practical joker, and it was very kind of him and Janet to spend the time to do this … and make a great memory for all of us.

Steve Wozniak then contacted Gizmodo offering more details concerning the exchange. He said: “An email-only acquaintance, Peter Fraser, came up with the idea and asked if I’d do it. I met him around the block to get the computer from him. After a short wait I drove to his house and surprised his daughter. But I had to keep driving to Tahoe that evening.”

Rather often when I meet people after appearances they mention how much it would have meant to someone in their family to meet me. I often ask them for the phone number and dial their son or spouse and pretend to be from Apple customer support asking questions about how they like their Apple products and more. It’s like a satisfaction survey. I either give my name early on or later and I ask the questions straight faced, like I really do it for Apple.

In recent months, Steve Wozniak has been spending time promoting the so-called “Chinese Apple,” Xiaomi, and before that he slammed the British press for misquoting his comments concerning the iPad Air.

Also last year, an Apple I computer autographed by Wozniak sold for $387,750.

Be sure to take a look at the above video. As father Peter Fraser notes, “This is like having your lightbulbs delivered by Thomas Edison.”

See also: Today’s Apps Gone Free: Billing Hours, Dubstep SX, Lulu In Polynesia And More, The AppAdvice Week In Review: What You Need To Know About Apple’s ‘iPhone 6’, and Drink To This: ‘Shazam For Wine’ App Drync Finally Goes Universal For iPad. 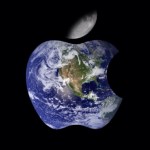 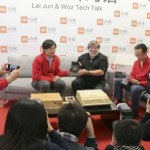 Steve Wozniak Claims 'Chinese Apple' Could Challenge iPhone's US Market Share
Nothing found :(
Try something else