It looks like Apple is in the process of testing a new notification feature for its Apple TV OS. During the iTunes Festival at SXSW, a number of users reported receiving a notification on their set-top box informing them that tonight's main act – Pitbull – was about to begin his performance.

The news reached us from 9to5mac, which explains that the notification (pictured above) “interrupts the currently-playing content” and asks users if they'd like to tune in to the live performance.

Rather than present iTunes Festival branding, the notification is quite generic and simply says “Live Show in Progress – Performing now: Pitbull. Would you like to watch this live show?” It then gives users the option to “Watch Now” or “Cancel.” It definitely appears to be a system-wide feature that Apple could easily expand to any app rather than something specially designed for the iTunes Festival.

Apple published a relatively minor update for its Apple TV OS recently, making it easier for users to hide unwanted channels and allowing owners to search for AirPlay connections using Bluetooth. However, refreshed Apple TV hardware has been on the cards for some time, either in the form of an updated set-top box or an all-out HDTV product.

This latest change could indicate that a revamped Apple TV experience is inbound. Bloomberg indeed claimed recently that a next-generation set-top box could be unveiled by Cupertino as early as next month, adding that Apple is aiming to launch the product in retail stores in time for Christmas.

References to a new Apple TV have also been spotted inside iOS 7, and recent reports have claimed that the new product could feature an integrated AirPort Express and add “true support for games.”

Have iTunes Festival-related notifications been appearing on your Apple TV? 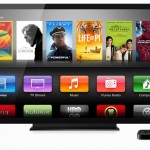 Another Nail In The Coffin For Apple’s ‘iTV’