If your ageing iPhone is suffering from battery trouble, one recently launched jailbreak tweak makes it easier than ever to gain quick, at-a-glance information concerning a jailbroken handset's battery life. Called BatteryStatusBar, the new package can be downloaded for $0.99 on the Cydia Store, and it's optimized for iOS 7 and ARM64-devices.

Once you've got BatteryStatusBar downloaded and installed on your jailbroken iPhone, you'll be able to configure the package from the built-in Settings application. Here, BatteryStatusBar adds a new preferences pane, and users can choose to enable or disable the jailbreak tweak, or to customize its appearance.

The only option available, however, is one that lets users switch between a thinner bar and a thicker bar. Regardless of which you choose, this'll be placed near the iOS status bar on your jailbroken device and it will be colored depending on your battery life.

If your iOS device's battery is at 65 percent or above, the bar will be green. Orange and red colors will also be displayed when users have less than 65 percent and less than 30 percent, respectively.

In its current form, BatteryStatusBar is a simple jailbreak tweak, for sure. But developer John Rickman has listed a handful of additional features as “coming soon” in the package's release notes, including:

If you're looking to activate an easier means of checking battery life levels on your iOS device, BatteryStatusBar could be of interest. Though with a $0.99 price tag, it may be worth waiting until the package has increased its feature set before spending cash on the jailbreak tweak.

As mentioned, you can pick up BatteryStatusBar for $0.99 on the Cydia Store, and it's optimized for iOS 7 and ARM64-devices.

See also: Following Its Launch On The Mac App Store, OneNote Gets Support For IFTTT, Save These Adorable Animals From The Darkness In Tanuki Forest, and New College Sports Apple TV Channel Launches From ACC, Campus Insiders. 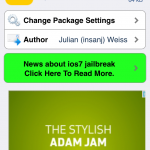 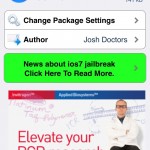 Cydia Tweak: How To Personalize The iOS Spotlight Search
Nothing found :(
Try something else