Apple and Samsung might be in the middle of a patent war with one another, but now ZiiLABS – a subsidiary of Creative Technology, formerly known as 3D Labs, Inc. – is going after both companies for allegedly infringing on a number of its graphics-related patents.

The news reached us from AppleInsider, which explains that ZiiLABS' lawsuit was filed “in the patent holder-friendly Eastern District of Texas” and specifically targets “system-on-chip designs manufactured by Samsung and used in both companies' devices.”

Besides going after iPhones, iPads, and Samsung-made mobile devices, ZiiLABS is also targeting Mac computers in its lawsuit: MacBooks, iMacs, and Mac Pros are all in the company's crosshair.

As the company, formerly known as 3DLabs, Inc, deals mainly with graphics processing hardware and software, most of the patents asserted are within this realm of expertise. Currently, ZiiLABS is marketing the “StemCell” ARM-based applications processor lineup, a version of which has recently seen use in 3M's mobile projector. The chips are also used in parent company Creative's various products.

Apple has custom-designed its iOS processing chips from the iPhone 5 onwards, yet all of the company's A-series mobile processors have been manufactured by Samsung. Injunctions against Apple and Samsung are being called for by ZiiLABS, along with past and future damages.

No hearing date has been confirmed, but we'll keep you updated as more information reaches us.

In related news, Apple and Samsung's second patent trial is set to commence tomorrow, on March 13.

Most recently, Apple lost another bid to have the South Korean company's products banned in the United States; Judge Lucy Koh declared that Apple hadn't sufficiently demonstrated the need for such a ban. 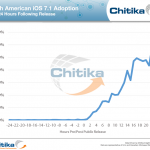 Around 6 Percent Of iDevices Are Already Running iOS 7.1 24 Hours After Its Release
Nothing found :(
Try something else