You are using an outdated browser. Please upgrade your browser to improve your experience.
by Aldrin Calimlim
June 18, 2014
Over the weekend, we first saw images of mockups of Apple's rumored 4.7-inch and 5.5-inch "iPhone 6" models side by side. Since then, we've seen several other images, particularly those of the handset's space gray variant. Now, we get to see a video essentially comparing a dummy of the 5.5-inch "phablet"-style iPhone 6 with what may very well be its foremost rival, the Samsung Galaxy Note 3. In a video posted by TechSmartt, the 5.5-inch iPhone is shown to be slightly taller than the Note 3, although Samsung's flagship phablet smartphone has a 5.7-inch display. Take a look: If you can't see the video embedded above, please click here. As noted by Apple Insider, the Note 3 is 151.2 mm tall, but the 5.5-inch iPhone 6 could be taller than that given the added height due to a carryover of design decisions from previous iPhone models. "The extended bezel area to the top and bottom of the display — carrying the ear speaker, proximity sensor and front facing camera, as well as Apple's Touch ID Home button — have not been slimmed down on these dummy models," the site notes. The models featured in the video, like the ones that were previously leaked, are just dummy models supposedly obtained from third-party case makers. As such, they do not replicate the exact specifications of the yet unannounced, let alone unreleased, devices. Be that as it may, these mockups give us a good idea as to what we can expect from Apple's new iPhone lineup launch this fall. See also: Good And Bad News About Apple's "iPhone 6," "iWatch," Apple's Bigger, 4.7-Inch iPhone 6 Could Feature A Quad HD Display, and Apple Rumored To Have Enough Sapphire For Both iPhone 6 Handsets, iWatch. 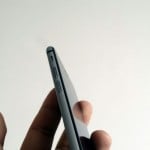