You are using an outdated browser. Please upgrade your browser to improve your experience.
by Joe White
June 23, 2014
In Britain, the Official Singles Chart is set to take streamed tracks into account for the first time ever. Though the U.S. Billboard Hot 100 indeed looks to services like Spotify in order to rank tracks in order of popularity, Britain's Official Singles Chart -- which is compiled by the Official Charts Company -- currently uses sales figures (either in the form of physical purchases or legal downloads) in order to compile its weekly list. This is indeed set to change, however, starting in July. From next month, the Official Singles Chart will also use streaming data from Spotify, Deezer, Napster, Xbox Music, Music Unlimited, and Rara. In order to match streaming against purchases, 100 "streams" will be considered the same as a purchase or download, the Guardian explains. Chief executive of the Official Charts Company Martin Talbot said:

Over the last 18 months we've seen a real explosion in the amount of streaming that goes on and it's a rapidly growing market. It's a shift in the way music fans, particularly hardcore music fans, are accessing their music. This singles chart is all about representing and reflecting music popularity and we felt that because of this rapid growth, we had to look to include streaming in our data.

The fact that many of us own iPhones with limited local storage has clearly helped streaming services increase their user base. Even owners of a 16GB handset can access a huge music library through Spotify without taking up precious space on their device, and as such it's no surprise that many iPhone owners lean on music streaming services in order to get their fix of music while on the go. As such, the aforementioned change should see the Official Singles Chart better reflect the music Brits are listening to. The move is indeed set to come into effect from the beginning of July; we'll keep you updated with further information as we receive it. In the meantime, see: Defy Gravity In Beyond Gravity, An Upcoming Sci-Fi Platformer From Bike Baron’s Creator, Dunkin’ Donuts Keeps You Running In Adult Swim’s Robot Unicorn Attack 2, and Uppercut Games’ Upcoming Submerged Makes Great Use Of The Unreal Engine. 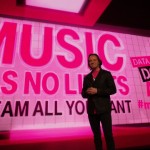