Before now, customers in Japan could only purchase a carrier-locked cellular iPad Air or iPad mini. The change, first reported by 9to5mac, also means that customers can “use their iPads with SIM cards for other carriers when traveling abroad,” the website explains.

Apple brought its iPad Air to NTT DoCoMo, Japan’s largest carrier, on June 10, and up until now Cupertino’s iPhone sales in the nation have proven to be particularly impressive.

Back in May, we explained that Apple’s share of Japan’s smartphone market had hit an all-time-high of 36.6 percent; Tim Cook has moved Doug Beck, chief of sales for Japan and North Korea, over to North America in an attempt to encourage equally promising sales on Apple’s home turf.

Apple also launched a new retail store in Omotesando, Tokyo, and its Grand Opening was attended by none other than senior vice president of Retail Angela Ahrendts. The venue is particularly impressive since it uses a sun-facing wall of leaves in order to prevent the store from overheating. 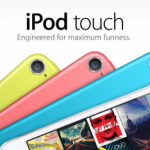