You are using an outdated browser. Please upgrade your browser to improve your experience.
by Joe White
October 27, 2014

Owners of Apple's iPhone 6 and iPhone 6 Plus will be pleased to hear that iFile, the popular jailbreak tweak, is set to receive an update adding optimizations for the newer handsets in the near future.

In a series of Twitter updates published by iFile's developer (@iFile4iPhone), we've had confirmation that new versions of the app are inbound.

The first of iFile's updates will fix a bug involving Box's software development kit (SDK), according to the developer. Then, however, we'll see an update adding support for the bigger 4.7- and 5.5-inch iPhone 6 and iPhone 6 Plus handsets:

It's already running on my iPhone 6 now and uses the additional screen estate (same valid for 6 Plus in Simulator).

The news comes not long after developer Ryan Petrich (@rpetrich) updated a handful of his popular jailbreak tweaks for iOS 8. As such, we're expecting more of the Cydia Store's popular jailbreak apps and tweaks to receive updates for iOS 8 and Apple's new iPhones in the near future.

Unfortunately, however, the Pangu iOS 8 jailbreak is still providing iOS device owners with an unstable solution – though the method is expected to gain improvements in the near future.

In the meantime, see: PhotoMath, the camera-powered calculator, is now better than ever, GravityLine gets updated for the iPhone 6, iOS 8 and goes free for a limited time, and Today’s apps gone free: Diana Photo, 1001 Attempts, Gramory and more. 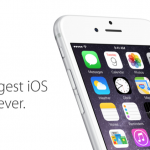 Good news, jailbreakers: Pangu for iOS 8 is set to improve 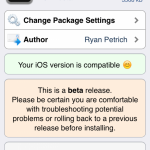 Popular jailbreak tweaks Activator and FlipSwitch get updated for iOS 8
Nothing found :(
Try something else