You are using an outdated browser. Please upgrade your browser to improve your experience.
by Joe White
November 29, 2014

A jailbreak solution for iOS 8.1.1 has hit the Web. While available for Windows users only (at least as of this writing), the solution – developed by TaiG – is compatible with a range of devices including the iPhone 6 (and iPhone 6 Plus), the iPad Air 2, and iPad mini 3.

Provided you’re running a Windows machine (or Windows using Parallels on a Mac, for example), TaiG’s iOS 8.1.1 is a breeze to follow. It’s available right now from TaiG.com, and though it hasn’t yet been translated into English, anyone familiar with the jailbreak process should have no problems working their way through the software. The folks at iDownloadBlog have even put together a video tutorial for anyone struggling with the process.

Usefully, the Cydia Store application comes bundled with the jailbreak and will auto-install on your iOS device. You don’t have to be running iOS 8.1.1 in order to use TaiG, either – the jailbreak solution is also compatible with iOS 8.0, iOS 8.0.2, and iOS 8.1. Here’s the full range of compatible devices: iPhone 4s, iPhone 5, iPhone 5s, iPhone 5c, iPhone 6, iPhone 6 Plus, iPod touch (fifth-generation), iPad mini, iPad mini with Retina display, iPad mini 3, iPad 4, iPad Air, and iPad Air 2.

For more information, including the option of downloading the jailbreak solution, call by TaiG.com.

See also: Form your ultimate NFL fantasy team in Run Games’ Football Heroes: Pro Edition for iOS, Dwelp is a new dot-connecting puzzle game unlike any other, and The Witcher Adventure Game for iPad out now on the App Store. 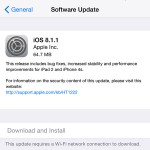