Late last month, Greg Joswiak, Apple’s Vice President of iPod, iPhone and iOS Product Marketing, gave a rare interview at the inaugural Code/Mobile conference organized by Re/code. Now, the full video of the interview has been made available for viewing online.

In the interview, Joswiak talked about a variety of topics related to Apple’s “best pipeline in 25 years,” including Apple Pay.

As previously reported, Joswiak also discussed Apple’s ill-fated iOS 8.0.1 release in September, which broke cellular connectivity and Touch ID support for a number of iPhone 6 and iPhone 6 Plus units. He admitted that the software update was a “mistake,” but chalked it up to how the update was distributed and not to a bug in the software itself.

Watch the video, which runs for just over half a hour, right here:

The release of Joswiak’s full Code/Mobile interview video comes just two days after The Wall Street Journal posted the full video of its interview with Apple CEO Tim Cook at its inaugural WSJD Live tech conference a couple of weeks ago.

See also: Apple says iOS 8 is now installed on 56 percent of devices, Apple expands its Device Enrollment Program to more countries and resellers, and Apple Pay could soon arrive in China via Alibaba. 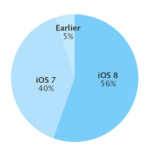 Apple says iOS 8 is now installed on 56 percent of devices
Nothing found :(
Try something else