You are using an outdated browser. Please upgrade your browser to improve your experience.
That iThingy You're Wearing
by Brent Dirks
February 10, 2015

In an almost hour-long talk at the Goldman Sachs Technology and Internet Conference, Apple CEO Tim Cook discussed a wide variety of topics including Apple Watch, Apple Pay, and more.

Cook said that the company is focused on its products instead of the record setting numbers recorded during the first quarter of fiscal year 2015.

Some of Apple’s biggest accomplishments during the last year, Cook said, were initiatives like HealthKit, HomeKit, and CarPlay.

“We’ve extended iOS into your car, home, and health,” he said. “That will be huge for our future.”

And just like the iPad, iPhone, and iPod before it, Cook said what makes the Apple Watch different is its ease of use.

“If we look back at the MP3 market, we weren’t the first company to do that, and there were lots of other devices out there,” he said. “They were fundamentally too hard to use, and you needed a Ph.D. to operate them. It was basically the same when the iPad arrived. I see the smart watch category much like that. There are several things called smart watches shipping, but I’m not sure you could name any. But none have changed the way people live their lives. We hope Apple Watch can do that.”

Cook, who has been using the device, said one of the biggest surprises for users will be the breadth of things that it can do. Personally, he uses Siri “constantly” and measures activity while working out.

He also is excited about the apps third-party developers are creating.

The response to Apple Pay has been faster than Cook expected. Currently, $2 out of every $3 paid by contactless payments are using Apple Pay.

Cook also took time to talk about the China market, the IBM partnership, and the future of the Mac.

Since Cook speaks only at Apple events and a small number of other engagements, it was very nice to hear him talk about the future of the company. Bright days are ahead with Cook at the helm.

For other news today, see: The Target Ticket video-on-demand service will shut down next month, The new Anki Overdrive will speed onto the market later this year, and ‘Better’ and ‘safer’ Touch ID arriving on Apple’s next iPhone. 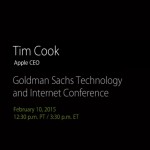 Itching to explore more about Apple Watch? It’s time for WatchAware
Nothing found :(
Try something else