You are using an outdated browser. Please upgrade your browser to improve your experience.
Getting Stuff Done
by Joe White
April 1, 2015

IBM is continuing to expand on its MobileFirst iOS offering, and has added eight brand new apps to the linup focusing on retail, insurance, and healthcare.

All eight applications are available now, and most of the apps – four out of the eight – are aimed at iOS device owners who work in healthcare. Each of IBM’s healthcare focused apps allow users to perform a number of tasks, including managing patient information and creating tasklists for healthcare professionals working inside a hospital or medical institution.

On the other hand, the four remaining apps are more diverse. The first, Rapid Handover, lets users working with industrial products manage team goals, product maintenance, and shift patterns from an iPhone or iPad.

Another app, Ancillary Sale, is made for the travel and transportation industry. It allows flight attendants to perform a number of tasks, such as upgrading seating or managing food and drink orders, during airline flights. Of course, the application supports Cupertino’s Apple Pay (as well as traditional credit and debit cards), and payment history can also be managed from inside the application.

Order Commit for iPad, however, is designed by IBM to allow merchants to access financial data for their businesses. Finally, Risk Inspect for iPad allows insurance workers to capture photos and videos, and to combine these with further information in order to reach decisions for insurance claims.

IBM’s most recent MobileFirst apps come after the company added three further applications to its lineup back in early March. The very first MobileFirst apps, however, were announced in December, and at the time Bridget van Kralingen, senior vice president of IBM Global Business Services, explained:

What we’re delivering aims directly at the new quest of business—smart technologies that unlock new value at the intersection of big data and individual engagement. Our collaboration combines IBM’s industry expertise and unmatched position in enterprise computing, with Apple’s legendary user experience and excellence in product design to lift the performance of a new generation of business professionals.

The move, of course, sees Apple attempt to secure ground in enterprise – a realm RIM’s BlackBerry platform has traditionally been king of. Apple has previously been trying to forge more enterprise-focused parterships with other companies, too, in order to make this happen.

For more information on IBM’s MobileFirst for iOS lineup, click this link. 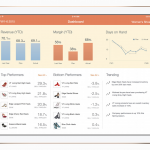 What about iPad sales?
Nothing found :(
Try something else