Role-playing games (RPGs) are often big hits on iOS, and many of the apps we celebrate at AppAdvice fall into this genre. One developer, though, is looking to bring the RPG genre to the Apple Watch, and has announced a new game called Runeblade that’s due to launch as a free app later this month.

Both here at AppAdvice, and at our sister site WatchAware, we’ve bemoaned the concept of games designed for the Apple Watch. Runeblade, created by Everywear Games, offers a smart solution to some of our concerns, however. You see, many feel that the battery life of the Apple Watch, which is good enough to squeeze a day of use out of – but little more, would naturally be a problem for Watch-designed games. In essence, any kind of gaming experience on the Watch would be a major battery drain; as we said in our previous article, “is anyone going to waste their smartwatch’s precious battery life on gaming when there’s a Twitter feed and email inbox to consider?”

Runeblade counters this, though, by offering Watch owners a gaming experience that requires roughly 5–15 seconds of attention from the user, only once every so often. You play the game over months, rather than hours, and as such the overall impact on the smartwatch’s battery life is less of an issue. Take a look at the below trailer for an idea of how Runeblade is going to work:

This kind of quick-fire game setup might not solve all seven of WatchAware’s “reasons why the Apple Watch sucks for games,” but it does pose the question: perhaps through developers’ adoption of a new kind of gaming experience for the smartwatch – one that relies on simple graphics, sparse animation, and quick-fire, jump-in jump-out elements – mobile games on the Apple Watch might just work. I’ll admit, though: that is a big “might.”

Either way, it’s going to be interesting to see what the developer community comes up with, and regardless, Runeblade is definitely an app that I’m going to take for a spin once my Apple Watch arrives.

For all the Apple Watch commentary and analysis you need, be sure to check out WatchAware. 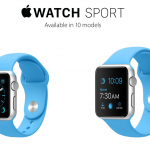 BandSwapper will switch your unused Apple Watch Sport Band for a different size or color
Nothing found :(
Try something else