You are using an outdated browser. Please upgrade your browser to improve your experience.
Security
by Joe White
May 29, 2015

Apple, in a support document published not long ago, has offered a fix for the malicious iOS text bug which we first told you about a couple of days back.

The document, which is available to access now, notes that Cupertino “is aware of an iMessage issue caused by a specific series of unicode characters,” and Apple adds that it will “make a fix available in a software update.” Until then, however, the company does offer a temporary solution similar to the one we told you about in our original article. As per our advice, Apple suggests that users call on Siri to help them out, and writes:

From here, users will be able to re-open and continue to use the iOS Messages app without their handset rebooting. Though it’s not an ideal solution, Apple indeed notes that a software update will fix this issue permanently in the near future; here’s hoping we see it ahead of WWDC, which is scheduled for June 8.

Check out Apple’s recently published support document, “If Messages quits unexpectedly after you get a text with a specific string of characters,” or for more of our recent news, see: Stay on top of your movie watch list with MooVee – Your Movies Guru, Google’s Cardboard virtual reality viewer arrives on the iPhone, and Fast-paced and fun arcade game Hyper Square is Apple’s latest App of the Week selection. 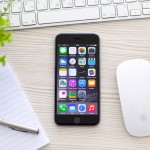 This iOS bug crashes iPhones using a simple text message, but there is a fix

The awkward truth behind automated messaging on iOS and Apple Watch
Nothing found :(
Try something else