You are using an outdated browser. Please upgrade your browser to improve your experience.
Accessories
by Joe White
May 1, 2015

On the hunt for the perfect charger for your brand new Apple Watch and your iPhone handset? Well, if you’re patient enough to wait until August, consider backing Duet Dock: a brand new dock for Apple’s smartwatch and smartphone that’s available to support on Kickstarter now.

The charging hub comprises of two parts: a stand for your Apple Watch, and a dock for your iPhone. Magnets allow both parts to snap together, making one unitified “charging hub” for both devices, and in order to better match your iOS device and Watch the dock comes in three different colors – silver, Space Gray, or gold.

Over at the product’s Kickstarter Web page, the folks behind Duet explain:

Duet is designed with modularity in mind. If you’re like us, you’ll be using your Duet beside your bed on your nightstand a majority of the time. But depending on which side of the bed your nightstand is, you’ll likely want a certain order of accessibility when it comes to your charging hub.

That’s why we’ve designed two possible configurations for Duet. The iPhone dock piece, being perfectly symmetrical, will be the same across all setups. However, when you choose your Duet setup, you’ll be asked whether you want your Apple Watch to be on the left or the right side of your iPhone, giving you control over a layout that’s more personalized to your particular preference.

As such, users can easily un-snap Duet’s iPhone section from its Watch stand in order to set one (or the other) up elsewhere. 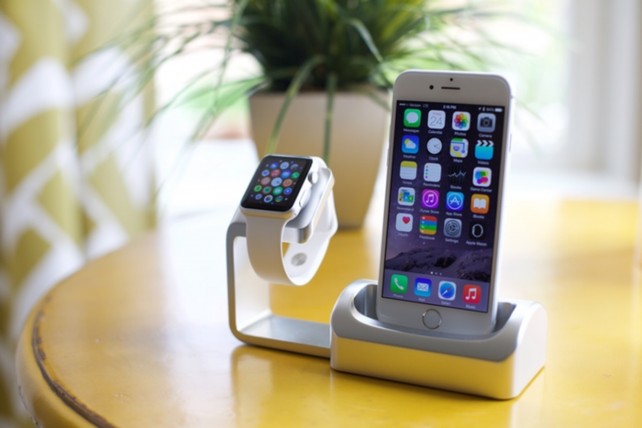 Usefully, Duet is compatible with all iterations of the iPhone which support the Apple Watch (iPhone 5, iPhone 5s, iPhone 5c, iPhone 6, iPhone 6 Plus), and regardless of which handset you’re using, the stand looks great. Personally, I love the aluminum look of Duet, and feel that it’d perfectly match Cupertino’s low-end Apple Watch Sport model.

Once it’s officially available for customers to purchase, Duet Dock will retail for $99. However, Kickstarter backers can pick up the stand for $20 off its retail price, at $79. The downside, though, is that Duet isn’t scheduled to reach backers until August – this estimate could easily get pushed back, too, if our previous experience with Kickstarter is anything to go by.

For more information on Duet Dock, including the option of backing the project (from $79), click this link.

See also: Today’s apps gone free: iComics, Hook, Be Mindful and more, Super Mario Brothers has been cloned in Super Bros, and Listen to your news on the go with Ekko Player.

Cupertino confirms a problem with tattoos and Apple Watch
Nothing found :(
Try something else