You are using an outdated browser. Please upgrade your browser to improve your experience.
iCarriers
by Brent Dirks
August 3, 2015

Apple could soon be your one-stop shop for everything iPhone. According to Business Insider, the company is currently in talks to become a mobile virtual network operator in both the United States and in Europe.

Acting as MVNO, Apple would provide your wireless service but use the spectrum from an existing carrier. Some other MVNOs currently operating in the United States includes Virgin Mobile, Boost Mobile, Cricket Wireless, and others.

Here’s how an Apple MVNO will work: Instead of paying your carrier every month, you will pay Apple directly for data, calls, and texts. Apple then provides you with everything you used to get from your carrier, but the Apple SIM switches between carriers to get the best service. The telecoms companies auction capacity to Apple so it can run the service.

But potential customers might have to be patient, according to the site:

There is no guarantee Apple’s service will launch beyond a test phase, and if it does, it will not roll out anytime soon. Telecoms sources say Apple is looking long-term with its MVNO and could take at least five years to fully launch the service. Apple has been in talks with telecoms companies for years over its MVNO plans, those sources say, adding that it’s an “open secret” among carriers that a virtual Apple network is on the way.

The Apple SIM is available for the Wi-Fi + Cellular iPad Air 2 and iPad mini 3.

We’ve already seen a bit of this flexibility with the Apple SIM for the Wi-Fi + Cellular models of the iPad Air 2 and third-generation iPad mini.

With that technology, introduced last year, users can switch their carrier with just a few taps on the iPad. It allows users to select plans from U.S. carriers and in more than 90 countries worldwide.

While Apple getting into the MVNO business isn’t a brand new rumor, I hope the company can finally throw its weight around with carriers to offer the service. Getting every part of the iPhone experience from Apple sounds very appealing. And I’m sure acting as a carrier could also help improve Apple’s bottom line as well.

For other recent news, see: Add sparkle to your business or personal cards with Glitter, Let your friends find your secret messages with Traces, and Siri, can you read my voice mail please? 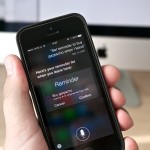 Siri, can you read my voice mail please?