In a cantina far, far away, you can become the best hologamer in the galaxy — by playing Star Wars: Galaxy of Heroes right on your iOS device wherever you may be.

A ‘Star Wars’-themed RPG it is

Developed by Electronic Arts in collaboration with Lucasfilm, Star Wars: Galaxy of Heroes is an RPG-style turn-based battle game where your goal is to become a Holotable master. To reach that goal you have to strategically assemble teams of heroes basically by mixing and matching characters from the “Star Wars” films and TV shows, and from both the light side and the dark side.

Constellations of characters and locations

True to its name, Star Wars: Galaxy of Heroes affords players a comprehensive collection of characters to choose from, including those from the original and prequel film trilogies and from the hit animated TV series “Star Wars: The Clone Wars” and even from the upcoming movie “Star Wars: The Force Awakens.” Each character has unique attacks and abilities, such as Chewbacca’s Wookiee Rage and Darth Sidious’ Force Lightning, so choosing characters with complementary capabilities is a decided plus.

At launch, the game already has 60 collectible characters, with more to come over time.

The game also features various iconic locations from the “Star Wars” universe as the settings of missions, including Bespin, Coruscant, Hoth, Tatooine, and more.

Compatible with iPhone, iPod touch, and iPad running iOS 8.0 or later, Star Wars: Galaxy of Heroes is available now on the App Store as a free-to-play title.

Star Wars: Galaxy of Heroes comes as part of the promotional frenzy surrounding the Dec. 18 release of “Star Wars: The Force Awakens,” which has also seen the arrival of the action shooter Star Wars Battlefront, the launch of a “Star Wars”-themed Disney Infinity 3.0 pack for the new Apple TV, and the introduction of special “experiences” from Google. 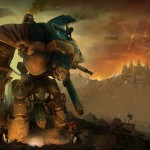 Fight with 3D Touch in Warhammer 40,000: Freeblade, out now on iOS
Nothing found :(
Try something else