Joining the likes of Crystal and Purify, Mozilla has just released a content blocker for iOS 9 in the form of Focus by Firefox.

Make no mistake: Focus by Firefox works with Safari and apps that use Safari View Controller only, not Firefox for iOS (which was released just last month). It’s through no fault of Mozilla’s own, though, that the app doesn’t work with its eponymous Web browser, since Apple currently doesn’t allow content blocking in third-party browsers on iOS.

Based on Disconnect’s open-source blocklist, Focus blocks the same trackers that are blocked by Private Browsing with Tracking Protection in Firefox for Windows, Mac, Linux, and Android.

Focus helps improve your browsing privacy by allowing you to block categories of known website trackers such as those used for ads, analytics, and social media. It also lets you block video, slide show and news article embeds that could track you.

Focus also enhances browsing performance by blocking some parts of webpages from loading, such as Web fonts (which are downloaded from servers rather than locally rendered). Consequently, webpages are loaded faster and mobile data usage is lowered. 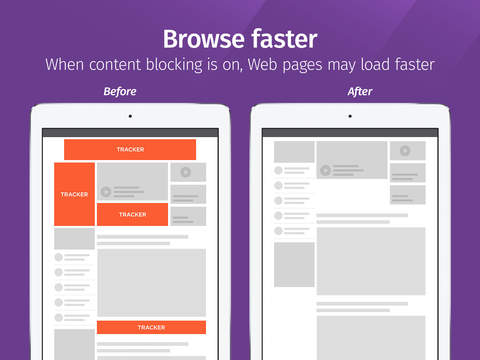 How to browse with Focus

You need to activate Focus first before you can block content in Safari with it. To do so, just download Focus from the App Store, open the Settings app, tap Safari, select Content Blockers, and toggle the switch for Focus to enable it. Then, close the Settings app, open the Focus app, swipe to the left until you see the “Focus is enabled” screen, tap Get Started, tap the switch next to each tracker you want to block, and close Focus.

Henceforth, Focus content blocking will be in place whenever you browse in Safari or any other app that uses Safari View Controller, like Tweetbot and Reeder. 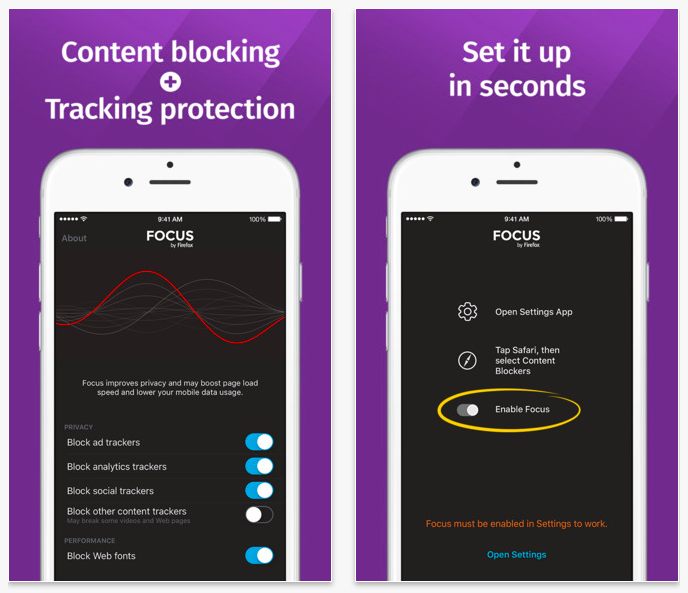 Compatible with 64-bit devices running iOS 9.0 or later, Focus by Firefox is available now on the App Store. Since it’s from Mozilla, Focus is, of course, free.