You are using an outdated browser. Please upgrade your browser to improve your experience.
The World Around You
by Aldrin Calimlim
February 4, 2016

Apple has just gone live with another round of coverage expansion for some of the key features of its Maps service. According to its updated listing of supported locations for iOS features, the company has brought Flyover, Traffic, and Nearby in Apple Maps to certain additional locations.

Perhaps the most interesting, if far from the most useful, feature of Apple Maps is Flyover. Apple’s sort of alternative to the more utilitarian Street View on Apple Maps’ chief competitor, Google Maps, Flyover provides photorealistic, interactive 3-D views that can be zoomed, panned, and rotated to allow users to explore select major metro areas.

And now, 20 new areas have been added to the list of locations where Flyover is officially available:

Apple Maps also includes Nearby, a Foursquare-like feature that lets users search for nearby businesses and establishments across different categories including food, drink, shopping, and more.

Previously, Nearby was available only in Australia, Canada, China, France, Germany, the Netherlands, the U.K., and the U.S. But now, Nearby has been made available in Finland as well.

The new data associated with this round of coverage expansion are accessible in Apple Maps on iOS 9 and OS X 10.11 El Capitan. 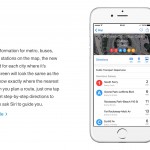