You are using an outdated browser. Please upgrade your browser to improve your experience.
Apple On The Street
by Brent Dirks
August 1, 2017

For the third fiscal quarter of FY 2017, Apple just announced revenue of $45.4 billion and profit of $8.7 billion. The quarter ended on July 1.

Those results compare to revenue of $42.4 billion in the same time frame a year ago. That’s a 7 percent increase.

During the timeframe, Apple sold 41 million iPhones, a slight 2 percent increase from the 40.3 million during the third fiscal quarter of 2016.

Surprisingly, iPad sales took a big leap forward with 11.4 million sold during the quarter. In the same time during 2016, Apple 9.95 million. That number is an even bigger increase, 28 percent, from the last quarter’s sales of 8.92 million iPads.

The services segment also jumped, recording an all-time high of $7.2 billion in revenue. That’s a 22 percent increase from the third quarter of fiscal year 2017.

“With revenue up 7 percent year-over-year, we’re happy to report our third consecutive quarter of accelerating growth and an all-time quarterly record for Services revenue,” said Tim Cook, Apple’s CEO. “We hosted an incredibly successful Worldwide Developers Conference in June, and we’re very excited about the advances in iOS, macOS, watchOS and tvOS coming this fall.”

“We reported unit and revenue growth in all our product categories in the June quarter, driving 17 percent growth in earnings per share,” said Luca Maestri, Apple’s CFO. “We also returned $11.7 billion to investors during the quarter, bringing cumulative capital returns under our program to almost $223 billion.” 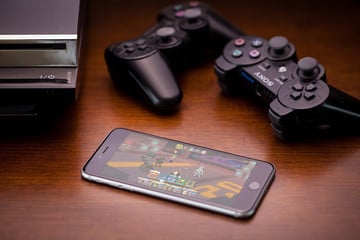 Enjoy a Meta RPG Experience in Galaxy of Pen & Paper

A Skiing Workout Mode May Eventually Arrive for the Apple Watch