You are using an outdated browser. Please upgrade your browser to improve your experience.
Apple Rumors
by Bryan M. Wolfe
November 8, 2017

Apple’s prepping a new augmented reality headset. The headset, which could launch as early as 2020, could eventually replace the iPhone, according to Bloomberg.

Today, millions of Apple fans are still trying to get their hands on an iPhone X.  In three years, however, the iPhone X will long be forgotten. In its place could be an augmented reality headset that won’t need a separate mobile device to operate.

Apple’s device will have its own display and run on a new chip and operating system, according to people familiar with the situation. The development timeline is very aggressive and could still change, said the people, who requested anonymity to speak freely about a private matter.

That new operating system, internally called “rOS” for “reality operating system,” is based on iOS. For now, Apple hasn’t finalized how users will control the handset and launch apps. It also hasn’t decided with rOS will have an App Store, such as the one for Apple TV.

Because Apple doesn’t yet have an augmented reality headset to call its own, the AR team in Cupertino is using HTC Vive headsets for testing purposes. They’re also using a device like the Oculus Gear VR headset that uses an iPhone’s screen, cameras, and chipsets.

According to Bloomberg, Apple hopes to release a new version of ARKit to developers in 2018, which will serve as a sprint board to the eventual release of an AR headset.

They could help developers create software that remembers accurately where a digital object was placed in a virtual space, using a technology called persistent tracking; you look away, and the object is still there. The tools will also make it easier to create AR games for multiple players.

It’s been a busy week for augmented reality Apple news.

On Tuesday, a report noted Catcher Technology would soon begin making parts for an augmented reality product. There’s still no word on whether Catcher’s doing this for Apple, which is one of its biggest customers.

I can’t wait to see Apple’s AR headset arrive. However, I’m willing to wait until 2020 or even later, as long as the company gets it right. Besides, I’d like a little bit more time with my iPhone X.

Do you want to see the day arrive when AR glasses or headsets replace your iPhone? Let us know below.

Do you want to see the day arrive when AR glasses or headsets replace your iPhone? 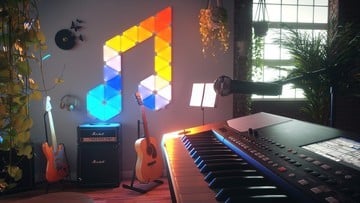 With Rhythm, Your Nanoleaf Light Panels Can Now Sync With Music

The Inner Workings of the iPhone's Portrait Mode Photography