You are using an outdated browser. Please upgrade your browser to improve your experience.
iDevices
by Joe Wright
August 4, 2016

Another day, another piece of “iPhone 7” news. This time, a video claiming to depict the handset running test software has hit the Web, though of course it remains to be seen if the smartphone depicted in the video is the real deal or not.

AppleInsider shares the video, and explains that the application seen running on the handset is one of Apple's own pieces of test software, from the Switchboard test suite. This suite is designed to check the components on Apple's iOS devices are running properly ahead of their release, and in the video (top-right), the camera test app appears to be running. This app, as AppleInsider adds, matches a previous version of Switchboard shown on an iPhone 6 handset some years ago. “This video does not utterly confirm that the device in custody is the new iPhone 7,” however.

AppleInsider is not familiar with Switchboard versions beyond the one that was used for the iPhone 6, and the interface in the video is identical to our previous limited experience with the test software. Given no apparent change in the interface, the possibility remains that the video depicts an iPhone 6 that has been transplanted into a mockup case running the iOS 8-based version of Switchboard. New iPhone case fabrications currently proliferate in the Chinese marketplace, but all seem to be from the same source of data.

The video doesn't give anything new away, save from what we've already heard. There's a slightly altered camera, potentially to allow for the iPhone 7's long-rumored dual-camera module. Annoyingly, the bottom of the screen is blurred, and this prevents us from seeing whether or not there's an audio jack included.

Yesterday, a “prototype” iPhone 7 appeared in a video depicting a blue handset. This, too, is a rumor we've heard before, though we'll know nothing for certain until Apple unveils its new handset sometime this fall. 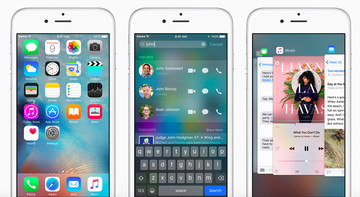