You are using an outdated browser. Please upgrade your browser to improve your experience.
by Christine Chan
February 5, 2016 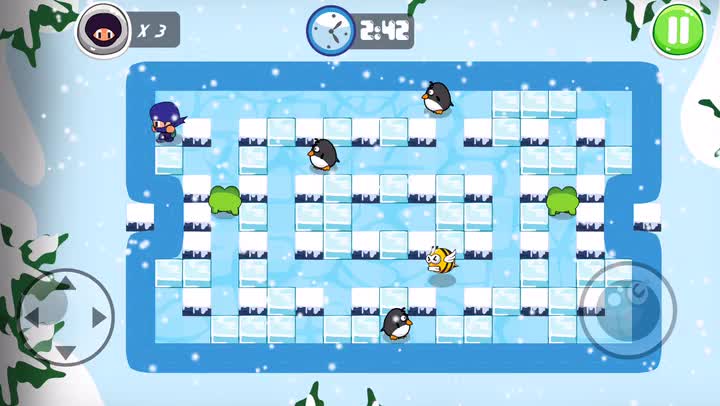 When I was growing up, I remember having a few of the original Bomberman video games for what I believe was a Game Boy system (I didn’t have a great memory of what I owned back then). I am not sure exactly why I liked the Bomberman games at the time, but I think it was my joy and glee watching enemies get blown up as they stupidly walked into the path of a bomb I had planted for them. I was an easily entertained kid back then, and I think that still holds true even more nowadays when I play video games. So of course, when I heard that Ninja Boy Adventures was coming out and played like Bomberman games, I just had to get my hands on it and check it out. How can I resist a solid piece of my childhood? 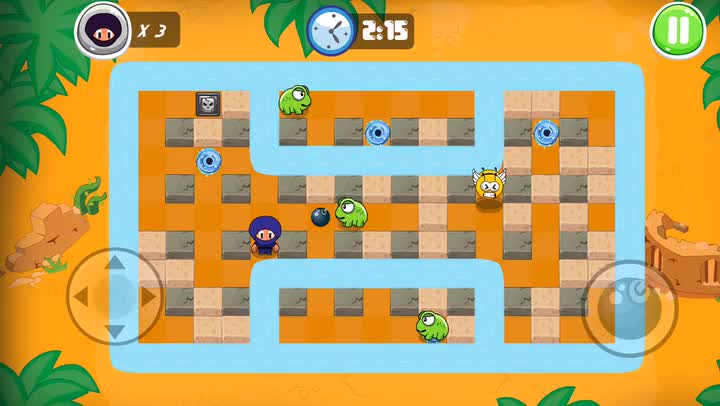 Visually, Ninja Boy Adventures has a modernized aesthetic, but it still serves as a nice tribute to the old-school Bomberman games of yore due to the simple style. The mazes are laid out in simplistic or complex layouts that definitely give you a challenge each time you play, and the colors are bright and vibrant, especially the squishy-looking menu buttons. I like the character sprites of Ninja Boy himself, as well as all of the various enemies and bosses, because the game is just bursting with personality and the characters feel like a blast from the past (Ninja Boy has a close resemblance to Bomberman, you can’t miss the similarities in character design). Animations are smooth and fluid, with no lag on my iPhone 6s Plus. The game also has an awesome, quirky chiptune soundtrack and fun sound effects that definitely give players a sense of nostalgia, so it’s a nice overall finishing touch to the game’s great visual and audio package.

There are two modes in Ninja Boy Adventures: Story Mode and Battle Internet. The Battle Mode allows you to play up with up to three other people in real-time over the Internet. If you have an Apple TV, the game also works on that, and everyone can play offline on one device, which is nice. The Story Mode is where you will probably spend most of your time though, and it includes a total of 30 levels that are distributed over 11 different zones and three worlds. This also has an optional collaborative mode where up to four players can play together to try and beat the game.

So what is the goal of Ninja Boy Adventures? Each stage puts you in a maze of walls and boxes that can be blown up to reveal some nice power-up items. You have to make your way around the maze and eliminate all of the enemies and bosses before the exit appears and you can move on to the next level. While it sounds easy, things get a bit more complicated as you encounter enemies that can freely roam around, fly over walls, and many other abilities. You’ll have to plan your exit strategy with precision, because sometimes you just never know if you’re going to be cornered. Plus, you have to watch out for those bombs you’re planting down as well — if you’re in the line of fire for the blast, you lose a life, and you only have so many of those (indicated at the top of the screen). To make things more challenging, each stage has a time limit as well, so you have to think quickly for your best plan of action within the allotted time frame.

The controls in Ninja Boy Adventures are simple and intuitive. In the bottom left corner, there is a virtual joystick for moving Ninja Boy left, right, up, and down in the labyrinth. Don’t worry if your thumb ends up straying from the corner, though — the joystick is not pinned to the corner, so it will follow your thumb around as you drag it to move Ninja Boy. To place a bomb down (you have an infinite number), just tap on the button located in the bottom right corner. But watch out — once a bomb is put down, it’s recommended to move at least a few squares away from it, as it takes a few seconds to detonate, and will kill you if you’re caught in the crossfire. 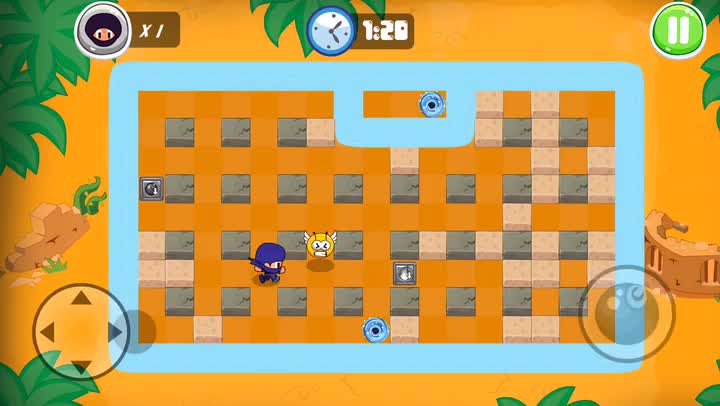 As I mentioned, there are power-up items to be found in the destroyable crates. These contain useful things like extending the range of the blast (be careful though), increasing the damage, land mines that trigger when stepped on, and more. But you’ll have to look at the power-ups carefully, because some are traps, such as instant-death or reducing your bomb power. Since you have to keep an eye on what drops from boxes as well as steering clear of enemy movement patterns, things can become pretty hectic as you make progress. It’s all about timing, accuracy, and most importantly, skill, in this game. I mean, that’s what the old Bomberman games were about, so why should this be any different?

Thanks to the co-op play and online multiplayer battles, there is plenty of replay value here even if you beat the game and obtain the best possible score for each stage. Plus, there is Game Center support for leaderboards and achievements, so there’s plenty of reason to keep coming back for more.

I grew up with the old Bomberman games and have missed them a lot, so it’s nice to have Ninja Boy Adventures on my iOS so I can get my Bomberman fix (as close as I’m going to get) while I’m on-the-go. The visual style in the game is beautiful, the retro music and sounds are a joy to the ears, and the controls are easy to pick up and rather intuitive. The difficulty of the game also ramps up gradually, so I think it’s friendly enough for anyone to enjoy.

I highly recommend giving Ninja Boy Adventures a try if you’re a fan of Bomberman or like challenging maze strategy games. Ninja Boy Adventures is available on the App Store as a universal app for the iPhone, iPad, and Apple TV for just $1.99. There are no in-app purchases, so you pay once and get the game on every platform. 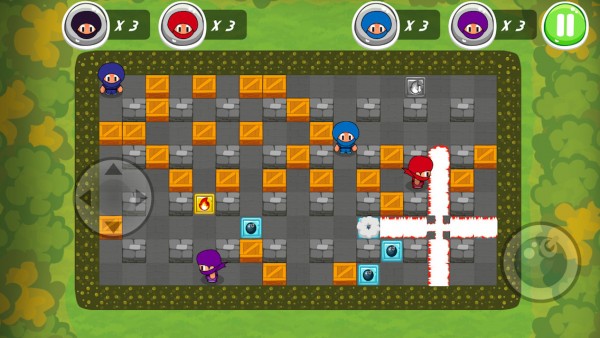 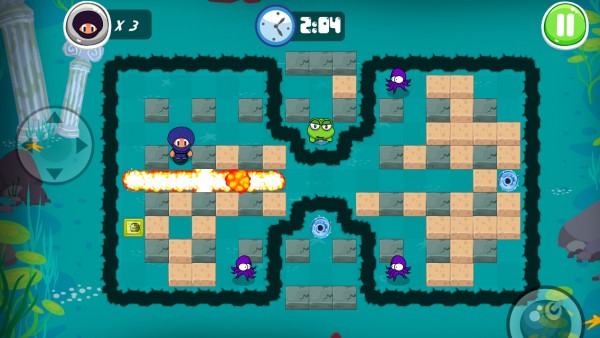 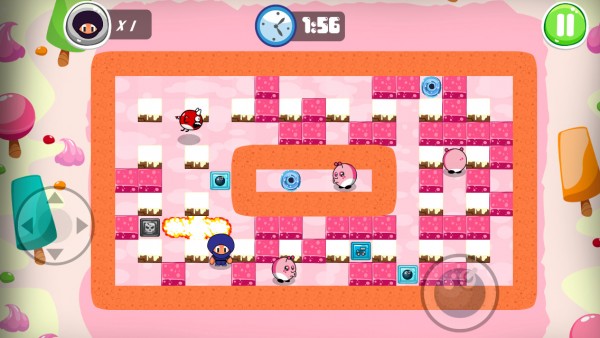 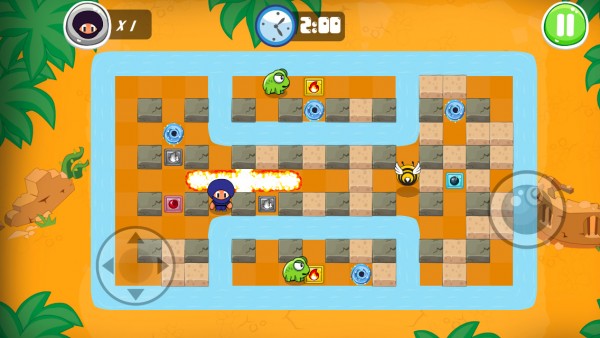 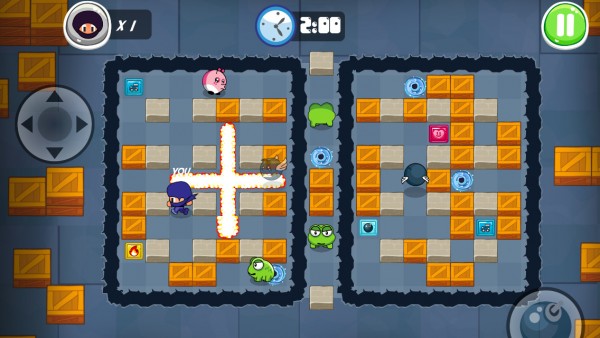