You are using an outdated browser. Please upgrade your browser to improve your experience.
by Christine Chan
February 1, 2017 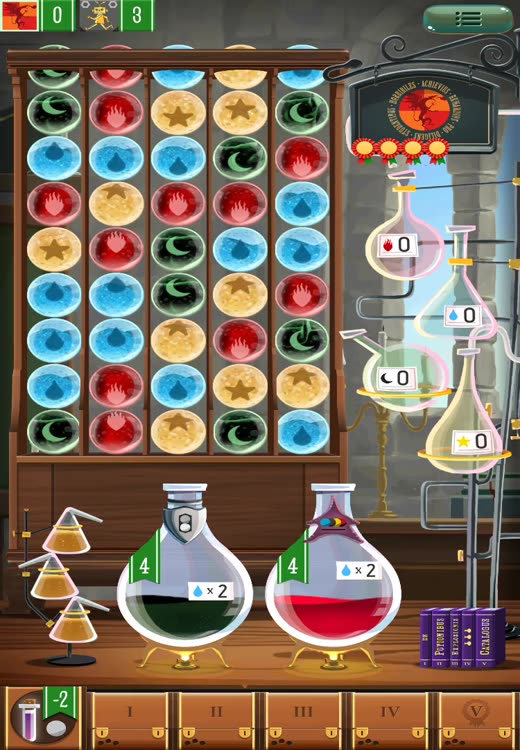 Potion Explosion ($4.99) by Asmodee Digital is the digital, mobile adaptation of the popular board game of the same name. If you liked other mobile board game adaptations such as Sushi Go and Exploding Kittens, but want a dash of match-three flavor, then Potion Explosion is one that you cannot miss.

While I love games, I have always preferred video games over board and tabletop games because it always involves less setup and cleanup time, plus it’s easier to just get games started rather than having to invite people to come over and whatnot. However, this doesn’t mean that I don’t like to play board games, it’s just much easier for me to play a digital adaptation of said board game rather than go out and buy the physical board game and get a bunch of people together to play it. That is, unless someone else has the game and invites me over to play. So naturally, when I hear of a board game that gets brought over to mobile or other console platforms, I’m always intrigued because it gives me a chance to try the game out before deciding if I want the physical version or not when I go to friends’ gatherings. When I saw Potion Explosion on the App Store, I was interested because it looked like an interesting take on match-three, and I didn’t even think about a board game having that mechanic in it, so I had to try it out. Needless to say, I’m not disappointed. 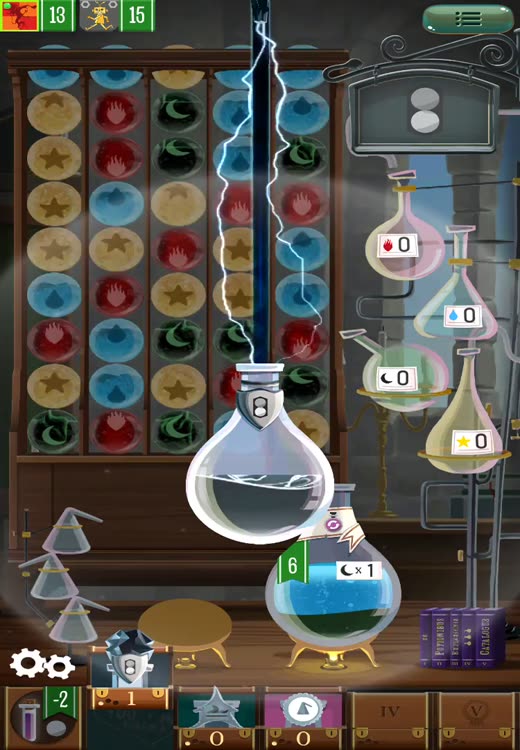 In terms of visuals, Potion Explosion is beautiful. The game is rendered in 2-D but the shiny baubles in the dispenser that represent the potion ingredients give everything a bit of depth. Everything is incredibly detailed, right down to the textures of the ingredients, potion liquids, beakers, and even the background that represents a magical laboratory. The colors in Potion Explosion are similar to the real-life counterpart, but from what I’ve seen from photos, this digital version looks much more bright and vivid, especially when it comes to the ingredient pieces themselves. Potion Explosion features fun visual effects and the animations are smooth and fluid with no lag on my iPhone 7. There’s also a soothing, whimsical soundtrack that will make you feel just like a wizard concocting potions, so it’s definitely captivating and immersive. Overall, Asmodee Digital did an exceptional job with bringing this board game to life on digital screens.

In Potion Explosion, there are two ways that you can play: online or offline. For online play, you will need to create an Asmodee account, which is free, but it is another online account that you’ll have to keep track of. If you do opt for online play, it is asynchronous, so everyone can play the game at their own pace. The only flaw is that there is currently no notification system, which means you’ll often have to check in and guess if it is your turn yet. Hopefully this is fixed in the future. For those who don’t mind offline play, you can go up against computer AI opponents, and there are two difficulty modes: Easy or Hard, though even Easy can be fairly difficult if you’ve never played the game before. All games, whether online or offline, must have at least two players and can go up to four in a single game.

So how do you play Potion Explosion? In each game, you can select the potion cards that will be used or go with a randomized selection for variety every time you play. At the start of the game, players get two of these potions that they have to complete with specific ingredients, and the potions themselves will have their own unique effects. To get ingredients, you tap on a piece in the dispenser, and then more slide down from the top. But here comes the fun part — if at least two ingredients of the same nature collide with each other, then you get those ingredients as well. You can then cook up those ingredients by dragging them to the potion you want to use them in, or just use the autofill button to have the game intelligently sort them out for you. Additionally, you have three spare beakers off to the left hand side where you can store extra ingredients that you want to keep for later — any other ingredients you’ve collected will be discarded after your turn ends, so choose wisely. 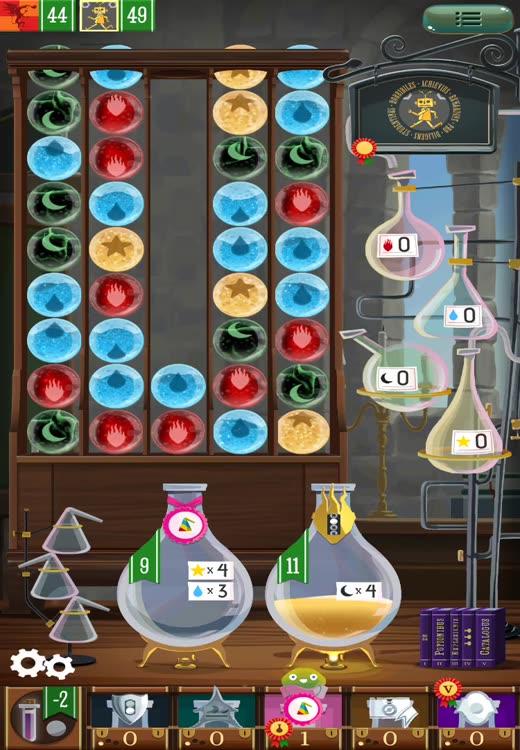 Once you complete a potion, you’ll be able to store it in your stash and use it whenever the time is right. Each potion has its own effects, and you can read what they do before using them. They can do things like steal all of the ingredients from your opponent, turn spare ingredients into wildcards so that they can be used to fill missing ingredients of other potions you are working on, reuse the effect of a potion you’ve used earlier, and more. When you complete a potion, you’ll be able to select another one to work on from the draw pile. All of the potions have their own point values as well, so when you complete a potion, the points get added to your score. The player with the most points by the end of the match wins.

Since I’m completely new to Potion Explosion, I’m still trying to figure out the best strategies while I’m playing, so I’m getting my butt handed to me by even the Easy AI opponents. Despite that, I am loving the game. The graphics are stunningly gorgeous, the music is tranquil and calming, and the controls are simple enough for anyone to understand. And while it may look like a match-three puzzle, there’s much more depth to it all since they only count if the ingredients collide with each other, so you’ll have to think carefully about each move if you want to maximize the effectiveness of your ingredient gathering techniques. The only complaint I have is that sometimes it feels like the game moves too slow when it’s your AI opponent’s turn, so I wish that there was a way to speed that up a bit. And there should be a notification system for the asynchronous multiplayer mode, because it does get annoying having to constantly guess if it is your turn or not. If these can be added in a future update, then the game would be even better. But it’s still a solid release, and one that should not be glossed over.

I highly recommend checking out Potion Explosion if you’re a fan of the physical board game, or just enjoy digital versions of board games or match-three puzzles. You can find Potion Explosion on the App Store as a universal download for your iPhone and iPad for just $4.99. There are no in-app purchases. 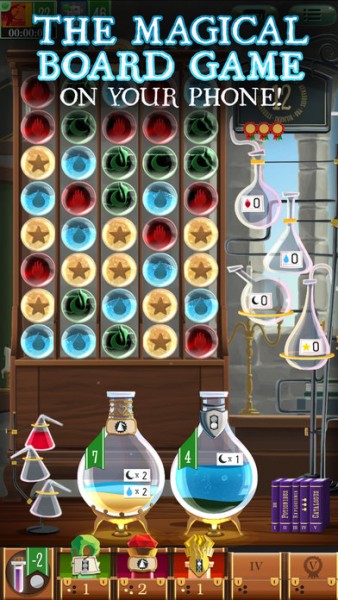 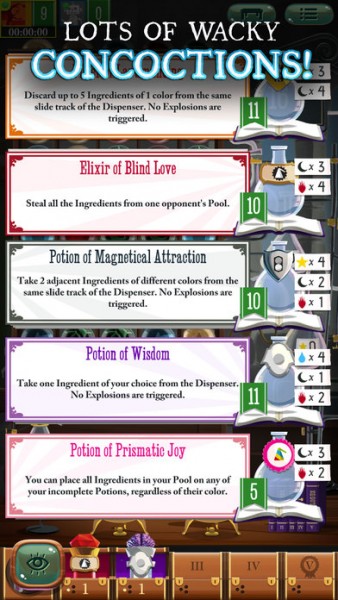 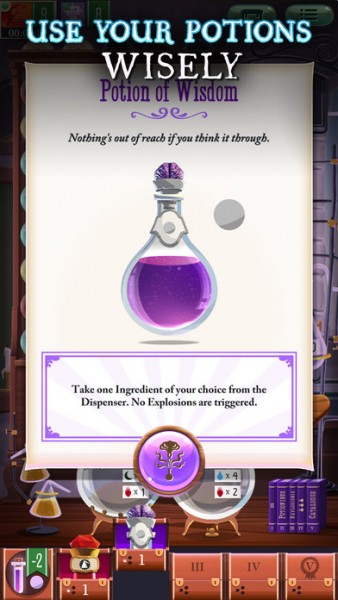 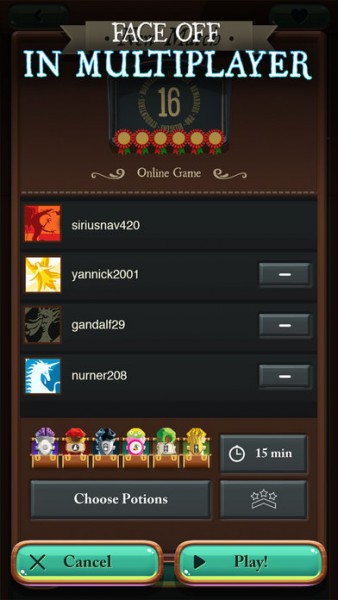 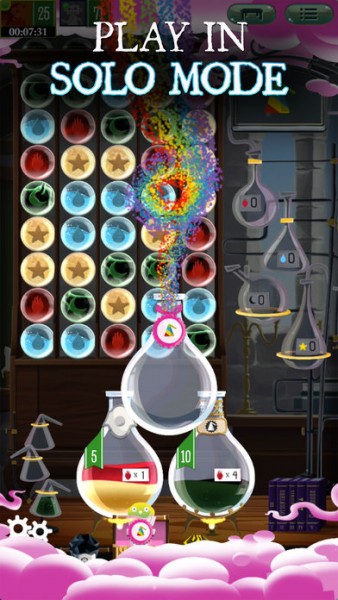