You are using an outdated browser. Please upgrade your browser to improve your experience.
by Joe White
April 28, 2011
Apple's elusive white iPhone 4 goes on sale today, almost 10 months after the device was originally announced. In this article, we're going to outline everything our readers need to know about the pearly white iPhone - from its original delay, to pricing and availability. Origins We first heard about Apple's white iPhone 4 over a year ago, when we exclusively uncovered the handset. However, the white iPhone almost immediately encountered delays, and its launch was unfortunately pushed back - forcing many Apple fans to settle for the black iPhone 4. Why the delay? The general consensus is that the handset's white paint was not working well with Apple's glass technology. This reportedly resulted in proximity sensor issues, and light leakage when using the iPhone's camera. Indeed, Apple cofounder Steve Wozniak confirmed in January that the white case ruins the iPhone 4's camera. In yesterday's press release, Phil Schiller stated:

We appreciate everyone who has waited patiently while we’ve worked to get every detail right.

As you'll find out in the next section, some "details" have indeed been changed in the white handset - suggesting that the paint did in fact disagree with the iPhone's proximity sensor, and most likely its camera, too. The handset This white iPhone 4 is very similar to the black iPhone 4 (as you would expect). The handset will be available in a GSM and CDMA version, and will reportedly retail at the same price as its black counterpart. Furthermore, the white iPhone features an improved proximity sensor and antenna (via iSpazio). Should I buy one? If you're worried about the white iPhone 4 becoming outdated in a few months, we have to admit - this is a possibility. In the past, Apple has announced every new handset at WWDC, which is held annually during the month of June. However, a variety of reports have suggested that Apple is planning on holding a "software-centric" WWDC this year (unveiling Mac OS X Lion and iOS 5), and pushing back the iPhone 5 announcement until September. Either way, Apple will most likely release a new iPhone - the fifth generation iPhone - this year, meaning the white iPhone 4 will very soon be outdated. If you're worried about this, we recommend that you either wait for the iPhone 5 (which will likely be released in a white version, too), or wait until after the iPhone 5 becomes available, and buy an iPhone 4 at a reduced price. Where can I buy one - and how much? If you live in North America, your best bet is heading over to an Apple Retail Store, AT&T store, or Verizon store today - as early as possible. On a two year contract, the white handset will be available for $199 (16GB) and $299 (32GB). The device is also be available to purchase via the Apple Online Store, and selected authorized resellers. UPDATE: All three U.S. online stores (Apple, AT&T, and Verizon) have updated their websites to include the white iPhone 4. Here are the links: Apple Online Store, AT&T, and Verizon. International launch The Americans aren't the only guys in on the fun - Apple is launching the white iPhone 4 in many other countries, too (Austria, Australia, Belgium, Canada, China, Czech Republic, Denmark, Finland, France, Germany, Hong Kong, Ireland, Italy, Japan, Luxembourg, Macau, Netherlands, New Zealand, Norway, Singapore, South Korea, Spain, Switzerland, Sweden, Taiwan, Thailand, and the UK). Are you going to buy one? Let us know in the comments! And here's a video of the Hong Kong launch for you to check out. 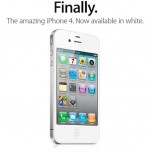 White iPhone 4 Launches Today: Here's Everything You Need To Know

White iPhone 4 Launches Today: Here's Everything You Need To Know
Nothing found :(
Try something else