You are using an outdated browser. Please upgrade your browser to improve your experience.
by Brent Dirks
April 10, 2012
Apple is very close to becoming the most valuable publicly traded company ever. Before dropping in afternoon trading, Apple’s market cap briefly hit the $600 billion mark this morning. Just a little more than four months into the year, Apple’s stock has been on a remarkable run. The company’s stock started the year trading at $411. But thanks to record iPhone sales and the overwhelming popularity of the new iPad, investors have seen the stock as a sure thing, and pushed Apple's shares strongly past the $600 mark. And with the new iPhone and iPanel both hopefully on tap this year, there seems to be more growth in store. According to some analysts, the all-time highs are just a preview of what is ahead for AAPL. Only last week, Gene Munster of Piper Jaffray said a $1,000 share price is very easily within the company’s reach in only two years. With a little less than 1 billion shares outstanding, that would push Apple’s market cap to a staggering $1 trillion dollars. Microsoft still holds the title for the largest market cap, which was $604 billion during the first dot-com bubble in 1999. Adjusting for inflation, that would be worth around $800 billion in today’s dollars. With Facebook’s purchase of Instagram for $1 billion still making waves today, some are speculating we’re in another technology bubble, with Apple leading the way. Do you think Apple can realistically continue to grow and take in revenue at such a fast pace for the foreseeable future? (Via MacRumors, image via Value Walk) 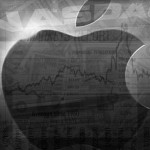