You are using an outdated browser. Please upgrade your browser to improve your experience.
by Joe White
August 10, 2012
A jailbreak solution for the third-generation Apple TV is reportedly not being developed, according to the famous iOS hacker @pod2g. The news hit the Web recently via a Twitter update, in which @pod2g noted that:

Apple's third-gen set-top box launched back in March, and since a Hulu Plus channel has been added with icon customization set to appear with the Apple TV's new OS (which is expected to launch alongside iOS 6). Back in March, we told you it would be possible to jailbreak the second-gen device, but that a jailbreak solution for the third-generation Apple TV would likely not launch. It would now appear that this is indeed the case. Apple TV owners can be assured that the news comes from a reputable source: @pod2g has been a prominent member of the jailbreak scene, having jailbroken the third-gen iPad, iOS 5.1 (untethered) and the iPhone 4S. This doesn't mean that a jailbreak solution for the third-gen Apple TV definitely won't be developed. Rather, it means that we're likely not going to see such a solution launch in the near future. Disappointed? Source: @pod2g Via: iDownloadBlog 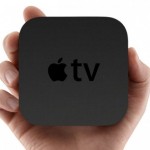 Third-Gen Apple TV Jailbreak Reportedly Not Being Developed
Nothing found :(
Try something else