You are using an outdated browser. Please upgrade your browser to improve your experience.
by Bryan M. Wolfe
October 2, 2012
In 2011, the Pew Research Center’s Project for Excellence in Journalism reported that Apple’s iPad controlled 81 percent of the tablet market. A year later, and that number has dropped significantly. Now, the percentage of tablet owners that report owning an iPad is just 52 percent. Meanwhile, 48 percent report owning an Android-based tablet. According to the report, “Nearly half, 48%, now own an Android-based device; about half of them, 21%, Kindle Fires.” Naturally, this could be viewed as bad news for Apple. However, this isn’t necessarily the case. In fact, it also highlights just how important (and likely) the so-called iPad Mini is to Cupertino. For one, the same survey notes that 22 percent of U.S. adults now own a tablet. This compares to 11 percent noted in the 2011 survey. In other words, while Apple’s overall share of the market has fallen, they are still selling more iPads than ever before, and many more than any other company. In July, Apple reported that iPad sales reached a record 17 million during the quarter. This was an 84 percent unit increase over the year-ago quarter. Additionally, Pew notes that Android’s growing strength in the market has a lot to do with the arrival of lower-priced tablets. On this, Apple could soon have a remedy. Earlier this week, it was reported that Apple might finally unveil the iPad Mini on Oct. 17. If correct, the tablet’s arrival would almost certainly affect sales of Amazon’s Kindle Fire and other tablets that are smaller and less expensive than the iPad. The original Kindle Fire is priced at $159, while Amazon’s new Kindle Fire HD is $199. By contrast, the least expensive tablet from Apple is the $399 16GB iPad 2. I certainly wouldn’t be surprised to see Apple lose the tablet crown to Android sometime soon. Still, if this were to happen, it wouldn’t tell the whole story. First, the iPad will also certainly retain the distinction of being the best-selling tablet overall, even if it were to be defeated by all Android tablets combined. Second, while other companies like Amazon actually lose money on each tablet sold, Apple does not. The arrival of the iPad Mini, however, would mean all bets are off. In this case, Apple’s percentage of the market could actually increase. For additional reading, see Is The iPad Mini Just A Fanboy Fantasy?, The Real Reason An iPad mini Makes Sen$e For Apple, and Incredible! New Renderings Show What The iPad Mini Could Look Like. Source: Journalism.org Note: Pew's survey, which was done in collaboration with The Economist Group. Pew interviewed 9,513 adults, which included 2,013 who own and use a tablet computer, and 3,947 who own a smartphone. 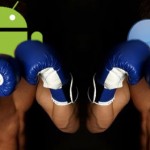 How The iPad Mini Could Change Everything

How The iPad Mini Could Change Everything
Nothing found :(
Try something else