You are using an outdated browser. Please upgrade your browser to improve your experience.
by Joe White
April 26, 2013
Apple has been forced to compensate three Chinese writers a total of ¥730,000 ($118,000), after the company sold the writers' books without first securing their permission. Though a third-party submitted the e-books in question to Apple, the Cupertino, Calif. company nevertheless failed to adhere to Chinese copyright law, and did not gain permission from the individual writers before their books appeared in Apple's digital store. One of the three authors involved was the best-selling writer Mai Jia. As China Daily notes:

Judge Feng Gang said Apple should take responsibility since, as a big online downloading platform, it has the duty of checking whether books uploaded by third parties are in line with current laws. "The writers involved this time include Mai Jia, whose books are often on best-seller lists across the country," he said. "In this way, Apple has the capability to know the uploaded books on its online store violated the writer's copyright." He suggested other technology companies with similar online platforms should learn from Apple's case and improve their verification systems to avoid similar disputes.

Recently, Apple has suffered a number of further blows concerning its operations in China. Within a single week, a Shanghai-based animation studio announced that it was suing Apple, Tim Cook was forced to apologize to Chinese customers about Apple's warranty policy, and an illegal application somehow found its way into China's App Store. Nevertheless, as the world's top market for smart devices, Apple's interest in China is only going to increase. For more information on Apple's relationship with China, see: Apple Donates 50 Million Yuan To Victims Of Chinese Earthquake, Apple Is Accused Of Providing Pornography In Chinese App Store, and Chinese Scammers Adopt New Tricks, Build iPhones Using Fake Parts. 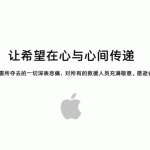