You are using an outdated browser. Please upgrade your browser to improve your experience.
by Joe White
May 7, 2013
Barclays analyst Ben Reitzes has just announced his faith in Apple, and in the company's potential to reclaim the value it has lost in recent months. Speaking with Fortune, Reitzes noted that he expects Apple "to change the narrative" by announcing and launching a selection of impressive products, starting with WWDC 2013 in June and following with a further iDevice-specific event in fall. Concerning Apple's anticipated product announcements, Barclays' Reitzes had this to say:

"[...] we believe Apple is about to change the narrative and get investors, analysts, customers and the media finally talking about new products again -- starting with a software/services/Mac event on June 10th and a likely iPhone/iPad event in September."

Back in February, Reitzes suggested that a 5-inch iPhone handset could be in the pipeline, since "one-handed use" appears to have become less of an essential factor for smartphones. More recent analysis, however, has indicated that later this year, Apple may launch both a low-cost smartphone and an upgraded "iPhone 5S" handset. The less expensive option could capture 11 percent of the low-cost market by 2014, if launched this year, according to Piper Jaffray’s Gene Munster. This, combined with an expected upgrade to Apple's line of iPads, which might include a Retina display-equipped iPad mini, will certainly generate interest in the company. Though whether such interest will be enough to boost Apple stock back into the stratosphere remains to be seen. Are you as optimistic as Ben Reitzes? For further reading, see: Yet Another Reason Apple Will Launch An iPhone Mini, Why Buying A Retina Display iPad mini For Christmas May Be A Bad Idea, and Even As It Celebrates Its Third Birthday, The iPad Is Still Doomed Say The Skeptics. 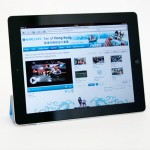 Barclays Bank In The UK Purchases 8,500 iPads To 'Assist Colleagues'
Nothing found :(
Try something else