You are using an outdated browser. Please upgrade your browser to improve your experience.
by Aldrin Calimlim
June 19, 2013
As we pointed out yesterday, a week after the release of iOS 7 beta for iPhone, the iOS 7 beta for iPad is yet to be seeded by Apple to developers. But Rozetked, a YouTube user based in Russia, has somehow obtained what he claims to be an alpha version of iOS 7 for iPad, which is demonstrated in the video below. Whether the video shows a genuine software version or just an elaborate rendering is open to question. But it does give us a good idea of what iOS 7 looks and feels like on Apple's popular tablet. The video shows the iPad's lock screen as being pretty much the same as on the iPhone. The iPad's stock app icons also shows the same (controversial) redesign as that of the iPhone's, including a live animated Clock icon and a new style for app folders. Note that the video shows a Weather app on the iPad, which, if the software being demonstrated is indeed legitimate, suggests that the iPad is finally going to have a preinstalled weather app on iOS 7. If you can't see the video embedded above, please click here. The video also shows iOS 7's Notification Center and Control Center working on the iPad. Both are displayed in proportion to the larger screen size of the tablet, as opposed to the unattractively stretched emulations that have been created by developers via Xcode 5. Another thing worth noting is the absence of a bottom menu on the iPad's Control Center. On the iPhone, Control Center's bottom menu offers shortcuts for the flashlight toggle and the Clock, Calculator and Camera apps. Presumably, because the iPad has neither a flashlight function nor a stock calculator app, the bottom menu on its Control Center is altogether disabled. Going further, the video presents a quick look at the Video and Music apps. It also shows the Settings app, but for a fleeting moment only, as opening this particular app triggers an apparent bug and restarts the iPad. Rozetked concludes his demonstration by showing a couple of third-party apps. One is optimized for iPad, while the other is optimized for iPhone and iPod touch. Running the latter in compatibility mode on the iPad reveals that the background is no longer plain black, as in previous versions of iOS. Rather, iOS 7 for iPad apparently displays the wallpaper in the background when using apps designed for iPhone and iPod touch. We'll find out for sure if the stuff in Rozetked's demo video is accurate when Apple finally releases the iOS 7 beta for iPad. During its WWDC keynote address last week, Apple stated that the iOS 7 beta for iPad would be released "in a few weeks." Via: 9to5Mac 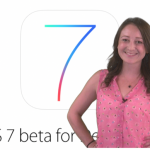 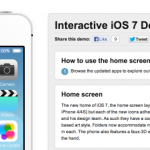 Want To Try iOS 7 Beta Yourself? Check Out This Interactive Demo
Nothing found :(
Try something else