You are using an outdated browser. Please upgrade your browser to improve your experience.
by Joe White
August 13, 2013
Bloomberg has weighed-in on Apple's next-generation iDevice offerings, claiming little out of the ordinary - save for the publication's speculation that an iPad mini with Retina display will indeed launch in 2013, rather than 2014. The "facts" offered in Bloomberg's report concern the iPad 5, which is said to feature a thinner bezel and similar-resolution Retina display (as expected), according to "people familiar with the plans." Of course, such news doesn't come as much of a surprise: after all, the purported images of the fifth-generation iPad's front panel indicated as much, when the photographs appeared online a few days ago. Bloomberg, however, includes something of a wild card in its report, and asserts that the next-generation iPad mini will be "the first with a high-resolution screen," indicating that - despite recent doubt - a Retina display-equipped small-size iPad could indeed be set to launch in the coming months. Don't expect the new iPads to appear alongside Apple's next-generation iPhone, the report adds:

After having minimal product introductions since last year, Apple will unveil a new iPhone at a Sept. 10 event, according to a person familiar with the plans. New iPad models, including an iPad with a thinner body design and an iPad mini with a high-resolution screen will be unveiled later, two people said.

In fact, Apple's iPad announcements are expected to come several months after it's unveiled the next-generation iPhone, Bloomberg argues. This would be a surprising move for the Cupertino, Calif. company to make, and most have been expecting all of Apple's iDevice-related announcements to be made at the same time, during the same event. Do remember, of course, that Bloomberg has got it wrong before, and that we'll know nothing for sure until Apple makes its iPad-related announcements, either on Sept. 10 or later in the year. As always, we'll keep you updated with further information as we receive it. In the meantime, see: CBS Sports Goes Universal, New iPad Edition Comes Complete With Live Video, Path Opens API To New Partner Apps Including Over, Strava And WordPress, and Apple Extends USB Power Adapter Takeback Program Beyond U.S. And China. 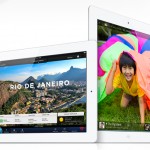