You are using an outdated browser. Please upgrade your browser to improve your experience.
by Joe White
December 10, 2013
It looks like Apple is still experimenting with curved touch displays. Because according to the United States Patent and Trademark Office, the Cupertino, Calif. company was recently awarded a patent outlining a manufacturing process that can produce “accurate, curved touch surfaces” presumably for use in either future iDevices, a future smart watch, or both. The news reached us from AppleInsider, which explains that the patent, titled “Curved touch sensor,” specifically concerns manufacturing curved displays “without deficiencies associated with warping or deformation.” In particular, the patent discusses the potential use of such curved touch sensors in touch screens, trackpads, and mice. AppleInsider notes that the application highlights problems with present processes, and details how the patented technology can overcome the problems cited:

For example, when depositing thin films over a flexible substrates like plastic, the annealing, or heating, temperature must be kept relatively low to avoid structural damage. Manufacturers, however, may prefer to employ high annealing temperatures for added rigidity and enhanced optical properties. To avoid deformation due to the annealing process, the patent proposes a technique that deposits a conductive thin film over a flexible substrate while it is in a flat state. Once in place, the substrate and deposited thin film are joined to a curved “forming substrate” and subsequently heated. The process results in a non-deformed curved touch sensor stackup with added benefits from the high-temperature anneal.

Of course, this isn't the first time we've heard of Apple's interest in curved technologies. Back in May, a report noted that the company was investigating the potential use of curved batteries in future products, and before this we heard that Apple had been awarded a patent for a curved AMOLED display. Then just last month, a report from Bloomberg citing “people familiar with the plans” claimed that Apple was planning two curved iPhone handsets for 2014:

Two models planned for release in the second half of next year will feature larger displays with glass that curves downward at the edges, said the person, declining to be identified as the details aren’t public. Sensors that can distinguish heavy or light touches on the screen may be incorporated into subsequent models, the person said.

Besides a curved iPhone, it's thought that this technology could also work well in Apple's long-anticipated smart watch product. Countless mockups have envisaged this product as “curving” around its user's wrist (as in the above image), and the aforementioned patent applications could be indicative of such a device. Most reports predict a 2014 release date for Apple's so-called “iWatch,” and previous analysis has indicated that the product could add more than $1 billion to the Cupertino, Calif. company's profits during its first year alone. We'll keep you updated with further information as we receive it. In the meantime, see: Create And Browse Pinboard Bookmarks The Quick And Easy Way With Pinswift, Baldur's Gate II: Enhanced Edition For iOS Could Launch In Time For Christmas, and AppAdvice International: China Mobile, iTunes Match And British Carriers. 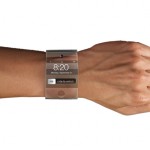 Report Claims In The Next 5 Years, Wearables Shipments Could Increase By 10 Times

The AppAdvice Week In Review: Sapphire Glass, The iPhone 5s, Gift Ideas And More
Nothing found :(
Try something else