Interested in seeing one designer’s idea how of how iOS 8’s Healthbook app might look? In a series of new mockups, designer CarlosQG has provided iOS device users with an imagining of Healthbook’s eventual design, in a concept that’s closely based on recent reports surrounding the anticipated application.

As a reminder, news concerning Apple’s Healthbook app first surfaced online towards the end of January. The app, which is expected to launch with iOS 8, is said to build on the development of Apple’s M7 coprocessor (and its anticipated release of an iWatch) to offer users “comprehensive health and fitness features.” Codenamed “Okemo” – after the Vermont ski resort – here’s how my colleague Aldrin described Healthbook in his report:

Healthbook is said to be patterned after Apple’s existing card storage app Passbook, but it’s designed to store and monitor health statistics and vital signs such as number of steps taken, weight loss, heart rate, and blood pressure.

As such, CarlosQG’s new concept builds on this description, taking clear inspiration from the Passbook app in his recent Healthbook concept (pictured above and below). Here are a couple more images:

Following on from the appearance of this concept, 9to5mac’s sources (which first shared news of the Healthbook app) claimed that the design was “vaguely” the right idea. The website rightly adds, however, that this design could change dramatically in the months leading up to iOS 8’s release later this year, so don’t hold your breath for a Passbook-style Healthbook app just yet.

In related news, a recent Apple job listing has indicated that the Cupertino, Calif. company is working on “new platforms,” and chief executive officer Tim Cook admitted that Apple has some “really great stuff” in new product categories incoming. Both point to an Apple-made smart watch, which most are expecting the company to release at some point this year. The long-rumored Apple HDTV has reportedly been postponed to 2015, as a result.

See also: Snap A Quick Selfie With This New Cydia Tweak, Hearst-Backed Personal Finance App Manilla Gets Redesigned For iOS 7, and Former Designer Sheds Light On The Dark Side Of Working At Apple.

The 2 New Apple iOS 8 Features We'd Like To See 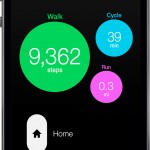 Apple Reportedly Focusing On Health And Fitness In iOS 8 With New 'Healthbook' App
Nothing found :(
Try something else