You are using an outdated browser. Please upgrade your browser to improve your experience.
by Bryan M. Wolfe
March 18, 2014
Some might be cheering today’s arrival of the 8GB iPhone 5c, or the return of the iPad with Retina display. Neither, however, represents Apple's first new product of 2014. The fourth-generation Apple TV is likely to grab that title in a matter of weeks. Here's the latest on Apple's next "hobby" device: Apple won’t be revealing an ‘iTV.” Nor will they be launching a device which offers a la carte TV programming, as was once believed. Instead, the next Apple TV focuses almost exclusively on being a gaming console. To achieve this, we’ve heard from sources close to Apple that the company is putting the finishing touches on a new digital marketplace that looks very similar to the App Store. Initially, it will include much of the same content. In time, games and apps unique to the Apple TV will become commonplace. Though no definite plans have been made, the Apple TV could ship with one or two exclusive games. An Apple branded game controller could also be in the offing, although it won’t ship inside the Apple TV box. A new remote control is also possible. Once you move beyond gaming, little is expected to change. The video content and applications you see today will also be available on the next device. Finally, for now little is known about what the next Apple TV will actually look like. It could look very similar (and smaller) than the current model — or it could take its visual cues from the Google’s Chromecast or Roku’s Streaming Stick, and simply attach to a television’s HDMI port. The next Apple TV should launch before the end of April. In the meantime, see: Amazon's Apple TV Competitor May Be Right Around The Corner, New College Sports Apple TV Channel Launches From ACC, Campus Insiders, and Notifications Appearing On Apple TVs Ahead Of Anticipated Refresh. 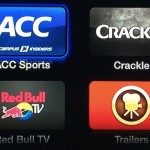