In order to join the program, simply visit Apple’s dedicated website and sign-in with your Apple ID. Then, after accepting a confidentiality agreement and installing a “BetaAccess” utility, users should find that a selection of prerelease software appears inside the Mac App Store’s “Updates” tab.

Included in the present selection is OS X 10.9.3, which Apple has gradually been enhancing with minor beta updates over the past few months. As a reminder, this software update is particularly significant since it allows owners of Apple’s MacBook Pro with Retina display to beam their computer’s ultra-high definition screen resolution over to a 4K monitor.

As we explained previously:

Prior to OS X 10.9.3, connecting a 4K display up to a MacBook Pro with Retina display saw OS X reproduce content on a larger scale, spacing elements out rather than doubling up pixels. As such, the “Retina”-grade resolution we’re familiar with on our iPhones, iPads, and MacBooks wasn’t reproduced.

OS X 10.9.3 changes this, and as of the launch of Apple’s OS X Beta Seed Program, anyone in possession of an Apple ID can update to the software free of charge.

Also bundled with the prerelease software is iTunes 11.1.6, which “restores the ability to sync contacts and calendar information to your iPhone, iPad, or iPod touch from your Mac,” according to Apple. Both OS X 10.9.3 and iTunes 11.1.6 should launch outside of the OS X Beta Seed Program in the near future.

Until then, you can try both out by signing-up for Apple’s recently launched program – though do remember that beta software comes with its share of risks. Regular backups are of course recommended! 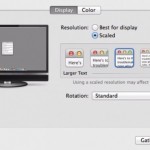