Cases and moulds for Apple’s anticipated iPhone 6 abound, and the latest leak shows more of the same. If accurate, the new dummy mould indicates that Cupertino’s next-generation handset should feature a thinner, slimmer design and curved edges reminiscent of Apple’s current-generation iPod touch.

Published by Nowhereelse.fr, the dummy appears to reflect a 4.7-inch iPhone 6 handset. As you can see, it’s clearly a lot thinner than the current-generation iPhone 5s; it also features curved edges and, as far as we can tell, a relocated power button.

Much like the iPhone 6 cases recently shared by Unbox Therapy, the anticipated handset indeed looks as if it could be as thin as the current-generation iPod touch – it also appears to borrow from the iPod’s curved edge design, too.

As a reminder, the iPhone 6 is also expected to feature a sapphire-coated display and under-the-hood performance improvements. Plus, a report published only yesterday argued that an enhanced camera system could launch with the handset, too. My colleague Bryan Wolfe explained:

The camera on the next iPhone may use electronic, not optical image stabilization. The “iPhone 6” camera could also boast a larger pixel size of 1.75 um compared to the 1.5 um pixel size of the iPhone 5s’ camera, according to new findings shared with Weibo by ESM China analyst Sun Chang Xu.

Apple is expected to unveil its next-generation iPhone in September or October at a dedicated special event. We’ll keep you updated with further information as we receive it.

In the meantime, see: AppAdvice Daily: Horrify Your Workout With Zombies, Run, The Lunecase For iPhone Is Powered By Electromagnetic Energy, and Dronius Is An Arcade Space Adventure That Is Quite A Challenge. 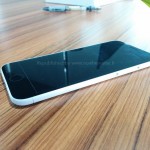 This iPhone 6 Mockup Shows A Bigger, 4.7-Inch Handset Based On Real Designs

Apple Begins Shipping Sapphire Glass For The iPhone 6 To China
Nothing found :(
Try something else