Got a spare $10,000 burning a hole in your pocket? Then you could be the owner of Apple’s iconic rainbow-style logo signs, which were used at the company’s Cupertino, California campus for years and are now due to be auctioned off in New York City next month.

British auction house Bonhams is handling the sale, Design Taxi reports (via The Verge), and the signs are expected to fetch somewhere in the region of $10,000 to $15,000.

Bonhams explains in its auction listing that the rainbow-style signs were taken down from Apple’s Cupertino campus and given to a longtime employee in 1997, before the rainbow logo was retired from service, and adds:

TWO EXAMPLES OF THE ICONOGRAPHIC RAINBOW LOGO FROM THE CUPERTINO CORPORATE HEADQUARTERS. The first Apple Computer, Inc. logo was actually a sketch of Isaac Newton sitting under a tree, an apple dangling above his head. Less than a year after its introduction, the Newton sketch was replaced by the Rainbow Logo, commissioned at Steve Jobs’ request. Jobs appreciated the simplicity of the apple (with a bite taken out of it, so that no one would confuse it with a tomato), and also insisted on the use of colors to “humanize” the company. The Rainbow Logo was in service from 1976 until 1997, when it was revised into the monochromatic version in use today.

The auction, “The Story of the 20th Century,” is scheduled for June 4, 2014, at 1 p.m. Eastern at Bonhams in New York City. The larger logo shows “significant craquelure,” and both exhibit signs of outdoor wear, the listing adds.

Unsurprisingly, the auction exceeded expectations and raised a huge sum for The Global Fund to Fight AIDS, Tuberculosis, and Malaria.

For more information on the aforementioned campus signs listing, head over to Bonhams’ website.

See also: Cydia Tweak: How To Download HD Movies From Inside The YouTube iOS App, SlideCut Is A New Jailbreak Tweak That Brings Clever Keyboard Shortcuts To iOS, and Cydia Tweak: LSStepCount Usefully Adds A Pedometer To The iOS Lock Screen. 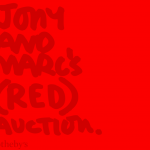 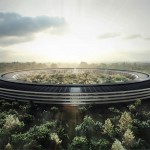 Updated: Apple’s ‘Spaceship Campus’ Gets Closer To Landing
Nothing found :(
Try something else