Apple supplier Pegatron has received 15 percent of the orders for Cupertino’s long anticipated 4.7-inch iPhone 6 handset, according to a recent report.

The news, which comes from Taiwan’s Industrial and Commercial Times (via Macotakara and MacRumors), also noted that Pegatron will be assembling some 50 million iPhone handsets this year. The figure is said to consist of iPhone 6, iPhone 5c, and iPhone 4s devices.

Of course, this does go against previous reporting which had stated that up to half of Apple’s iPhone 6 orders could be manufactured by Pegatron. In a subsequent report from Reuters, it was also noted that the company had hired additional staff and space in an attempt “to meet orders to manufacture the new iPhone 6.”

Foxconn, Apple’s long-time supplier, is expected to pick up the remaining orders for the next-generation iPhone.

It had also previously been said that Apple is working on two separate versions of its iPhone 6 – one with a 4.7-inch display, and another with a larger 5.5-inch display. However, according to a report published in April Apple’s 5.5-inch handset “could be delayed,” and may launch after the 4.7-inch device.

Both handsets are expected to feature a thinner design, a sapphire-coated display, and under-the-hood performance improvements (including a next-generation A8 processor and an enhanced M8 motion-tracking coprocessor).

The 4.7-inch iPhone handset, at least, should launch in September or October this year. Here’s hoping Apple’s 5.5-inch iPhone isn’t too far behind.

In the meantime, see: Apple Overtakes Staples, Grabs The No. 2 Position In Online Retail, Apple Is Set To Open Its World Trade Center Apple Store In 2015, and Modulo Is The Swiss Army Knife Of Portable Battery Packs For Your iOS Device. 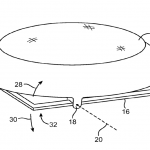 Will A New Apple Invention Finally End Pocket Dialing With iOS Devices?
Nothing found :(
Try something else