Apple’s iPhone 6, second-generation iPad Air, and third-generation iPad mini are all expected to feature a Touch ID-equipped Home button, and now a recent report notes that the first Touch ID units for the three iOS devices have been provided by Taiwan Semiconductor Manufacturing Company (TSMC).

In a report from GforGames which cites component website cecb2b.com, information concerning TSMC’s completion of the first second-generation Touch ID sensors is provided. The website explains:

TSMC (short for Taiwan Semiconductor Manufacturing Company) has already provided the first batch of iPhone 6, iPad Air 2 and iPad Mini 3 fingerprint sensors, sometime in mid-April. This bit of information comes from sources inside Sazhou Crystal Semiconductor Technology Co. – one of the subcontractors to which some “back-end” services have been outsourced. Another subcontractor mentioned by the report is Xintec.

Despite a previous report claiming otherwise, we heard in February that TSMC would be using the same production method for Apple’s Touch ID units – though at the time, we were unsure whether the fingerprint scanner would be included on Apple’s next-generation iPads.

This latest report is of course good news for those of us who were disappointed when the iPad Air and second-generation iPad mini launched without support for the feature.

Besides Touch ID, TSMC is also thought to be at least partly responsible for manufacturing Apple’s next-generation A8 processor. Samsung, too, is manufacturing a percentage of A8 chips, a subsequent report added.

Apple’s iPhone 6, iPad Air 2, and iPad mini 3 should all be announced later this year across two separate special events. The iPhone 6 is also expected to feature a bigger, thinner redesign, a sapphire-coated display, and enhanced performance. If the above report is accurate, it looks like Touch ID could be the big feature coming to Apple’s 2014 iPad line. 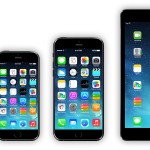 There Is No Way This Apple 'iPhone 6' Rumor Is Correct
Nothing found :(
Try something else