You are using an outdated browser. Please upgrade your browser to improve your experience.
by Joe White
June 15, 2014
According to a new report, Foxconn -- Apple's longtime manufacturer -- is looking to team up with Sharp in order to secure orders for future iPhone and iPad displays. The news comes following previous flirtations between Foxconn and Sharp, though significantly, such a move could also help Cupertino take a much-needed step away from Samsung. The Taiwan-based United Daily News published the report, which reached us from GforGames. It's claimed in the article that Foxconn and Sharp are currently in talks to take on display orders for Apple's future iPhones and iPads; if a partnership is formed, this would surely be good news for Cupertino. Because as of this writing, the iPhone-maker is relying more and more on Samsung to produce the displays utilized in its iPhone and iPad models. In fact, during the first quarter of 2014 Samsung was actually the largest supplier of iPad displays, despite Apple also sourcing its displays from the likes of LG, Japan Display, and Sharp. Given Cupertino's recent courtroom quibbles with Samsung, such dependence places Apple in a tricky position. Of course, this is all speculation; Foxconn and Sharp haven't announced a manufacturing partnership, and it could be they never do. We'll keep you updated with further information as we receive it. Besides its iOS device displays, Apple also relies on Samsung to produce its A-series mobile processors. Though we'd heard previously that Cupertino had enlisted Taiwan Semiconductor Manufacturing Company (TSMC) as the "sole" manufacturer of its next-generation A8 chip, a report in March indicated that Samsung would be helping with production on this front, too. For Apple and Samsung, breaking up is indeed hard to do. Whether Foxconn and Sharp could help on this front remains to be seen. See also: Apple Rumored To Have Enough Sapphire For Both iPhone 6 Handsets, iWatch, Textilus Goes 5.0 With New Ink Notes, Bluetooth Stylus Support And More, and The New York Times Publishes A Big Profile On Apple CEO Tim Cook. 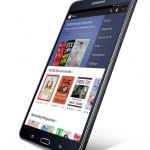 Barnes & Noble To Partner With Samsung To Produce Co-Branded NOOK Tablets
Nothing found :(
Try something else