Apple is scheduled to open its new retail store in Atlanta this weekend.

As noted by 9to5Mac, the company has announced that it’s set to hold the grand opening of its new store in the capital city of Georgia on Saturday, Sept. 6, at 10 a.m.

Located in the Cumberland Mall, the new retail outlet is Apple’s third store in Atlanta (joining the stores in Lenox Square and Perimeter) and sixth store in Georgia (along with the ones in Alpharetta, Augusta, and Buford).

With Apple’s announcement also comes news that construction of a new Apple retail store in Toledo — set to be the eighth in Ohio — is about to begin.

Just over a week ago, Apple inaugurated its sixth retail outlet in Connecticut, located in South Windsor.

Of course, Apple’s efforts to extend its retail reach are not limited to the U.S. alone. Headed by Angela Ahrendts, Apple’s retail team has also been expanding to new locations around the world. It has even been reported to be preparing to build the largest Apple retail store yet in Dubai, United Arab Emirates. 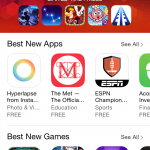 Apple updates App Store review guidelines with sections for new features in iOS 8
Nothing found :(
Try something else