According to Rovio, players of its hit Angry Birds physics-based puzzle game series have slung one billion birds. In celebration of this milestone, the high-flying entertainment company has revealed the voice cast of the upcoming animated movie based on the series.

In addition to the voice cast list, Rovio has revealed the first official promotional image (pictured above) from the movie, which is a 3-D CG-animated film.

“Angry Birds” is scheduled to premiere in the U.S. on July 1, 2016. It’s directed by Fergal Reilly and Clay Kaytis from a screenplay by John Vitti, and produced by Rovio in collaboration with Sony Pictures Imageworks.

The movie will mark the debut of Angry Birds on the big screen, following its ongoing stint on small screens in the weekly Angry Birds Toons animated series, which was launched by Rovio in March last year. 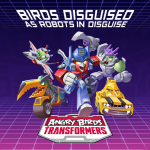