You are using an outdated browser. Please upgrade your browser to improve your experience.
iDevices
by Brent Dirks
May 4, 2015

With a possible release date sometime later this year, we’re starting to hear even more information about the long-rumored “iPad Pro.”

According to a new report from AppleInsider, the 12.9-inch tablet will offer a number of new features including Force Touch technology, a Bluetooth stylus with pressure sensitivity, NFC support, and a USB-C connector.

The NFC support would possibly bring another interesting use case for the device. Instead of being used like an iPhone 6 or iPhone 6 Plus to make contactless Apple Pay purchases, the tablet could be a receiving terminal for payments. That could be a big plus for smaller businesses looking to add support for the mobile payment system.

And while we’ve heard about the possible inclusion of an Apple-designed stylus with the tablet before, the site’s source says that it would connect to the tablet via Bluetooth and offer pressure-sensitive input. The tablet screen itself will also offer the same Force Touch technology currently found on the Apple Watch and rumored to appear in the next-generation iPhones.

Interestingly, the site says that the tablet will indeed ship with a USB-C connector. First making an appearance on the new MacBook, it could allow consumers to use other USB-based accessories with the iPad. It’s unknown whether Apple will include a Lightning port on the tablet as well, but a leak in late March showed ports in the vertical and landscape orientation.

Even though iPhone sales continue to go through the roof, the iPad line has been suffering from a recent sales decline. Last week, I offered four ways that Apple could kick-start iPad sales, including releasing the “iPad Pro.” And the rumored tablet is shaping up to be a game changer.

For other news today, see: Crush those creepy crawlers in Spider Smash HD, Celebrate ‘Star Wars Day’ with these iTunes titles and learn about the new characters in ‘Star Wars: The Force Awakens,’ and Does Apple want to see the end of free music streaming services such as Spotify and YouTube?

Image of the “iPad Pro” mockup via MacRumors 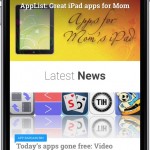 AppAdvice for mobile: A new way to find Apple news and the best apps for your iPhone and iPad

The 10 biggest technology stories this week: Apple Watch snafus, Hulu's plans for 'Fear The Walking Dead' and the arrival of the LG G4
Nothing found :(
Try something else