You are using an outdated browser. Please upgrade your browser to improve your experience.
Pocket Gaming
by Aldrin Calimlim
December 11, 2015

Out of the blue, but very much in line with the approach of winter, Icycle: On Thin Ice has just received its very first, and apparently also its very last, content update.

Developed by Reece Millidge’s Damp Gnat and published by Electronic Arts’ Chillingo, Icycle: On Thin Ice is a quirky puzzle platformer that has you guiding a cold, naked dude named Dennis as he traverses a “beautiful but deadly post-apocalyptic frozen wonderland” on his tiny bicycle.

We here at AppAdvice are fans of the game. And it has all but assumed cult classic status among iOS gamers for its clever combination of dark absurdist humor and vibrant audiovisual effects.

Released in November 2013, Icycle: On Thin Ice got its first update update in March 2014. But that update proved little more than a performance-enhancing one, as it only “applied some oil to those squeaky wheels of Dennis’ bike.”

And ever since then, the game hasn’t seen any activity on the update front, as though it were in a frosty desolation of its own. Well, that is until now, as a surprise update has just come out for Icycle: On Thin Ice, bringing the game to version 2.0 two years after its launch.

Icycle: On Thin Ice 2.0 presents the finale to the game. Dubbed “The Bright Side,” it wraps up the story of Dennis with seven new locations on “the bright side of the apocalypse.” Plus, it features three new bonus levels playable from Dennis’ Scrapbook of Dreams.

Icycle: On Thin Ice 2.0 also sees the addition of support for Apple’s ReplayKit. Now, you can tap the new film reel button to record your gameplay (with or without accompanying audio commentary) and share it with the rest of this pre-apocalyptic world that we live and die in.

A couple of new Game Centre achievements and new adornments for Dennis are also included in the update.

Compatible with iPhone, iPod touch, and iPad running iOS 7.1 or later, Icycle: On Thin Ice 2.0 is available now on the App Store as a free update or as a new $2.99 download.

Get it now and help Dennis get through to the end, lest he be at his wit’s end.

For more recently updated iOS games of note, see also: One of Apple’s top games of the year, Fallout Shelter, receives a nice update, A winter wonderland and other ‘cool’ stuff await in The Sims FreePlay, and Epic adventure Oceanhorn receives improvements for iPad Pro. 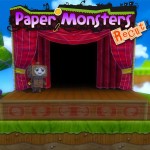 Paper Monsters gets Recut once again to be completely free on iOS
Nothing found :(
Try something else